Bushiroad is rolling out more and more updates for the TV anime series of its newest mixed-media franchise D4DJ (Dig Delight Direct Drive DJ): just this Monday, a new teaser visual was revealed for the series. Check it out below! 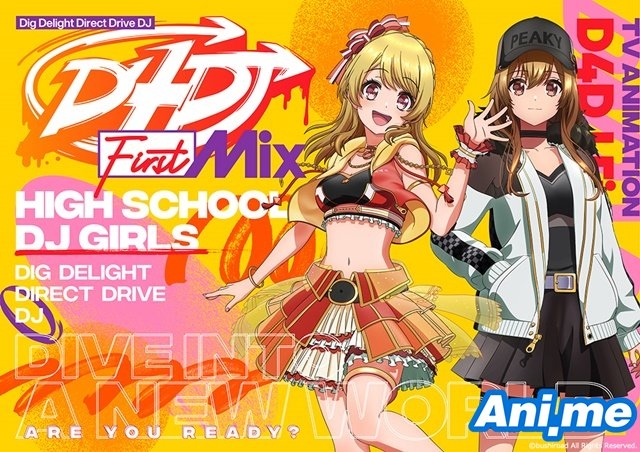 The teaser visual features two characters from the franchise: Rinku Aimoto and Kyoko Yamate from Happy Around! and Peaky P-key respectively, two musical groups from the franchise. The visual was revealed at the live no-audience concert MixChannel Presents D4DJ CONNECT LIVE last Sunday.

The opening theme song of the series will be performed by the unit Happy Around! The yet-to-be-titled song is written by Kou Nakamura (BanG Dream! original story writer) and composed by Hyadain.

The anime project was first announced last February. Acclaimed anime director Seiji Mizushima (Fullmetal Alchemist, Mobile Suit Gundam 00) was earlier announced to be directing the anime project for D4DJ (Dig Delight Direct Drive DJ). Sanzigen Animation Studio will be handling animation. It was also announced that Mizushima and Sanzigen are currently working on a promotional video for the “Happy Around” musical unit of the D4DJ franchise.

D4DJ is described as a “DJ-themed mixed media project” which includes live DJ performances, an anime (as mentioned above), and a smartphone game. The game, entitled D4DJ Groovy Mix, will be released for iOS and Android devices sometime in 2020. The game was announced to be getting a global release as well. Donuts is developing the game for Bushiroad.

Below are the six musical sub-units in the franchise, along with the characters and their corresponding voice actresses.