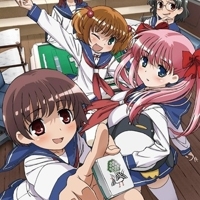 Saki Miyanaga is a high school freshman who dislikes the game mahjong. Since her early childhood, her family would always force her to play. The game would always conclude with Saki at the losing end, even when she technically wins the game. Due to this, Saki had learned to play mahjong in a way that her score would remain at a neutral 0; a skill said to be more difficult to learn compared to actually winning streaks.

Unaware of these circumstances, Saki’s friend from middle school naively takes her to their high school mahjong club. There, after discovering Saki’s unique skill, the club recruits her and convinces her to win instead of breaking even. Since then, Saki discovers her new love for mahjong, and thus their journey to the national high school competition begins.

Saki is an anime adaptation of the sport manga series under the same name, written and illustrated by Ritz Kobayashi. Produced by studio Gonzo and Picture Magic, the anime series aired a total of 25 episodes between April 6, 2009 and September 28, 2009.

Episode 1: Encounter
Saki Miyanaga is invited by her friend Kyoutarou Suga to see their high school’s mahjong club. There, Saki displays her skill of finishing with a score of +-0 consistently across multiple games, and explains how she came to hate mahjong.

Episode 2: Battle
After finally learning how to appreciate the game, Saki decides to officially join Kiyosumi’s mahjong club. Meanwhile, Nodoka laments after losing to a player who hates the game.

Episode 3: Confrontation
Nodoka remains distant from Saki. She had been secretly trying to replicate her playstyle through practicing with online games, but had failed. However, Saki befriends her, and promises that they will go to the national mahjong tournament together. Hisa and Mako proceed to register for the Nagano Prefectural Tournament.

Episode 4: Beat-down
Hisa takes Saki and Nodoka to play against customers at a maid cafe, while explaining the details of the coming tournament. Later, Saki and Nodoka are completely beaten by Yasuko Fujita, who was apparently Hisa’s friend, and a professional mahjong player. Hisa then announces her plans for a mahjong training camp.

Episode 5: Training Camp
The mahjong club goes to a mountain retreat and begins the mahjong training camp, with each member having a unique set of training.

Episode 6: The Tournament Begins
Saki and the rest of the club arrive at the tournament area. However, Saki gets separated from the other members. Meanwhile, Nodoka, as current junior high school champion, attracts the attention of many reporters. Hisa then briefs the club about the player order, shortly after Saki rejoins them.

Episode 8: The Night Before
The qualifying teams prepare for the coming finals match.

Episode 9: Eyes Open
Mihoko dominates the game points for Kazekoshi team and defeats Yuuki with the help of her ability: deduction of tile discards.

Episode 10: Beginner
Mako plays with her glasses off, which allows her to compare discard patterns with the previous matches. Despite this power advantage, Mako ends up in last place, and loses to novice player Kaori Senoo.

Episode 11: Prank
Hisa is playing her match against Hajime Kunihiro. She utilizes her strategy of illogical bad waits, in order to confuse her opponent’s thinking. Meanwhile, Nodoka’s penguin is stolen by two players from the opposing team.

Episode 12: Awakening
Koromo returns Nodoka’s penguin after fixing it. The match between Hisa and Hajime continue.

Episode 13: Light Fever
The vice-captain matches begin, with Nodoka against Touka. Touka confirms her suspicion about Nodoka and her playstyle. However, unknown to her, Nodoka had tweaked her playstyle during the training camp. After Nodoka effortlessly gains the lead, Touka gets fired up.

Episode 16: Conspiracy
Saki starts to doubt her play and becomes fearful. This time, Koromo reveals her powers and instills fear in her opponent’s hearts.

Episode 17: Nightmare
During the break, Nodoka encourage Saki and reminds her of their promise. The second round continues, and ends with Koromo dominating the following plays.

Episode 18: Link
Kana reignites her will and fights back with a kazoe-yakuman. Yumi also finds her own way to strike back, agitating the winning Koromo. Meanwhile, Saki struggles to find her momentum, and goes barefooted similar to her games at home. From a consecutive low-scoring plays, Saki surprises Koromo with a sudden burst of score.

Episode 19: Friends
The final match reaches its peak, as each player find themselves with limited options. In the final hand, Saki outplays them all with a highly rare kazoe-yakuman, winning her the match, and consequently qualifying their club into the nationals. Despite losing, Koromo is relieved to have found people who enjoy playing mahjong against her.

Episode 20: Sisters
Saki and the other club members go to a pool to celebrate their win. There, they meet the other competing teams. Later, the players proceed to train for the coming individual tournament.

Episode 21: Looking Back
The individual tournament commences. Touka is defeated by Kaori’s beginner’s luck during the east rounds. Meanwhile, Kiyosumi players are the center of attention, as they are the current champions. Later, Hisa and Mihoko finally recognize each other.

Episode 22: Promise
Yuuki loses against Kazue Nanpo. Later, it is revealed that Saki had been playing by ending the games with her signature neutral score. She explains that she did it for Hisa. Saki then ends up in a match against Hisa, Momoko, and Tomoki.

Episode 23: Determination
Momoko continues her assault on Tomoki, while Hisa keeps on winning strong plays. Meanwhile, Saki is struggling to use her usual game style. Fortunately, Saki recalls her training using online games, which allows her to win the match. In the end, Saki qualifies for nationals at third place; Nodoka qualifies second; and Hisa failing to earn enough points.

Episode 24: Summer Festival
Kyoutarou invites Saki and the rest of the club to an upcoming summer festival. Yuuki fails her math midterm exams, which will restrict her from attending the national training camp should she also fail the makeup test. Saki and Nodoka come to help her study. In the end, Yuuki passes her makeup test, and the players proceed to training camp for the nationals.

Episode 25: Nationals
During a discussion about the national powerhouses, Hisa confirms her suspicion that Saki is related to Teru. Saki is then informed that Teru denies being her sister, making Saki upset. Nodoka takes Saki to a shrine to cheer her up.

Anime Rating
7.7/10
355 users rated this.
Similar in these categories.