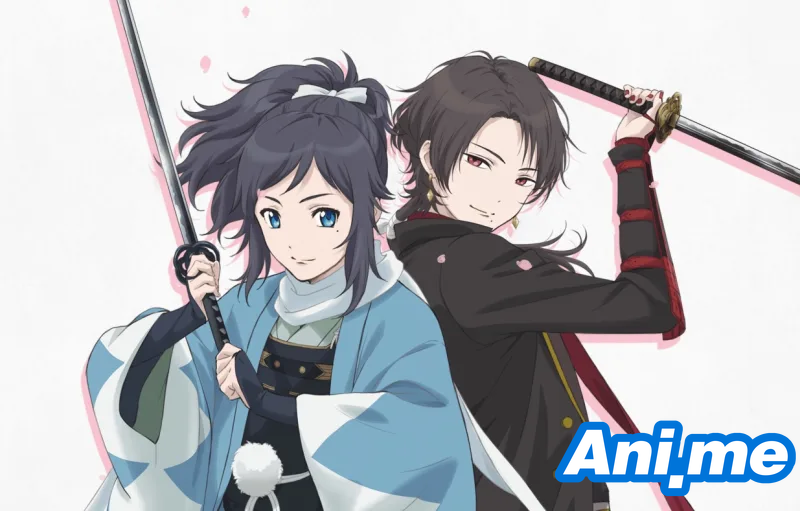 As of this time, the announcement did not specify yet which medium the project will be released. However, it did state that it will take time before Touken Ranbu Hanamaru staff will reveal more information about this. So we will have to be patient for more updates.

Previously, the December issue of Monthly Hero magazine announced that the popular online browser and mobile game Touken Ranbu will have another manga anthology which is slated to be released in spring 2020. This anthology project was a way to commemorate the magazine’s eighth anniversary.

The announcement came with a beautiful illustration of Izuminokami Kanesada created by Majestic Prince and Get Backers illustrator Rando Ayamine.

The second project that has been confirmed is an upcoming collaboration with a pachislot and pachinko maker Universal Entertainment.

Touken Ranbu is a browser game created by DMM Games in which the player obtains swords in the form of handsome swords. A majority of the first generation of swords are named and inspired by real historical Japanese swords. The popularity of the franchise has paved way for an anime adaptation Touken Ranbu: Hanamaru, manga adaptations, and a couple of stage play adaptations.

The first anime adaptation Touken Ranbu Hanamaru first premiered in October 2016 for a total of 12 episodes. The second season Zoku Touken Ranbu: Hanamaru was aired on in Japan on January 8, 2018 on BS 11 and Tokyo MX. DMM also began streaming the anime on its website on the same day. This season still followed the same format as the first where the episodes are named after months of the year.

The 28th and final chapter of the Touken Ranbu: Hanamaru manga was released on April 4 last year. The manga is created by Saru Hashino and was released in December 2016. It is based from the anime series of the same name.

Katsugeki! Touken Ranbu star Ryohei Kimura as Izuminokami Kanesada (or Kane-san for short), Junya Enoki as Horikawa Kunihiro, Kento Hama as Mutsunokami Yoshiyuki, Tooru Sakurai as the Yari Tonbokiri, Seiichiro Yamashita as Yagen Toshiro, and Soma Saito as Tsurumaru Kunikaga. To make sure that the anime film will remain accurate to its original basis (an online browser game as well as a bit of Japanese historical background), the ufotable staff was guided along with the following individuals: Tatsuya Yamamura for historical research, weapons animators Mitsuru Obunai, Masayuki Kunihiro, and Masaru Kimura, and swordsmanship guidance by Kogyoku Watanabe.

A live-action film adaptation of the franchise was also produced and opened in theaters in 2019. The film was directed by Saiji Yakumo (who directed Mars live-action) with script written by Yasuko Kobayashi (JoJo’s Bizarre Adventure, Kagegurui, and Attack on Titan).

In its cast members, five from the Touken Ranbu stage plays will be reprising their roles like Hiroki Suzuki as Mikazuki Munechika, Yoshihiro Aramaki as Yamanbagiri Kunihiro, Shiina as Fudou Yukimitsu, Ryō Kitamura as Yagen Toushirou, and Masanari Wada as Heshikiri Hasebe. Joining them in the movie were Hiroaki Iwanaga (Berserk anime’s Guts) as Nihongou, Fūma Sadamoto as Honebami Toushirou, Taizō, and Tomoki Hirose as Uguisu Maru.

About Touken Ranbu Hanamaru (as described by Crunchyroll)

In the year 2205, the past becomes threatened by the historical revisionists who seek to change it. Protecting history becomes the task of a boisterous band of swords that are brought to life, including the glamorous Kashu Kiyomitsu and the kindly Yamatonokami Yasusada. Beyond their battles, these legendary swords from different eras lead charming daily lives.

On the talk of Touken Ranbu, there is still no word if the browser game will be released in English and will be accessible for other countries. As of this time, only those living in Japan have access to the game. For the convenience of the players, the Touken Ranbu game can also be accessed on mobile for both Android and iOS devices. Same as the browser game however, you need to have a Japanese IP address if you want to download the app and play the game on the go.

There is seem to be more stuff to look forward to after all in the world of Touken Ranbu. We hope more of the sword boys from the game will be featured in its other upcoming mediums.