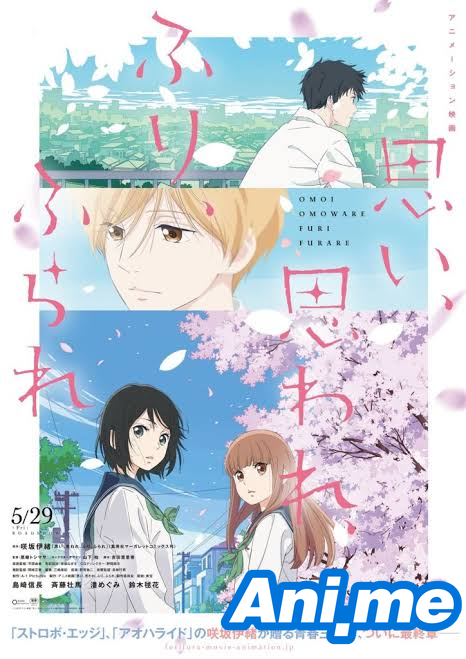 A new trailer was just revealed for the anime movie adaptation of Io Sakisaka’s shoujo manga “Omoi, Omoware, Furi, Furare” (Love Me, Love Me Not). The trailer reveals the anime film’s main staff, cast, and May 29, 2020 release in Japan. Check out the trailer here!

·         Marika Suzuki (in her first-ever voice acting role) as Yuna Ichihara, a shy girl who loves reading shoujo manga but hasn’t experienced love yet. She falls in love with Rio, Akari’s step-brother.

·         Megumi Han as Akari Yamamoto, a girl who befriends the shy Yuna. She initially pushes Yuna to Inui, the latter’s childhood friend, but eventually falls for Inui herself.

·         Nobunaga Shimazaki as Rio Yamamoto, Akari’s step-brother. Before his father married her mother, he was in love with her but had to suppress his feelings once they became step-siblings. Eventually he falls for Yuna but is hesitant to confess

The film will be directed by Toshimasa Kuroyanagi (Say, “I Love You”, The Great Passage) with Erika Yoshida (Namu Amida Butsu! – Rendai Utena -) penning the scripts. Character design is done by Yuu Yamashita (Bunny Drop) and Yuuji Nomi (Whisper of the Heart, Say, “I Love You”) is in charge of composing the music. The film is produced by A-1 Pictures.

Omoi, Omoware, Furi, Furare is Io Sakisaka’s latest work, which was first published in 2015. The series just released its last chapter this April. Anime News Network describes the series’ plot as such: