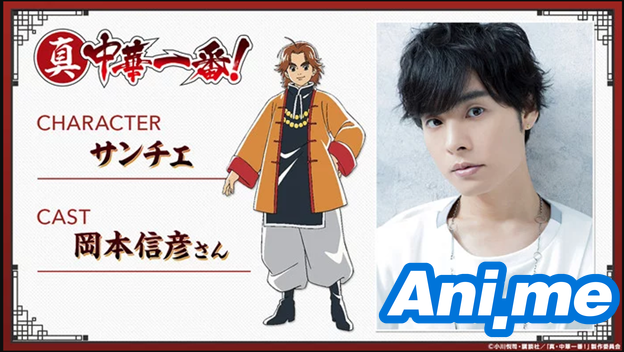 The official website of the currently-running Shin Chuka Ichiban!, or better known to English-language fans as Cooking Master Boy, just announced this Friday that voice actor Nobuhiko Okamoto is set to join the cast. Okamoto will voice Sanche, the son of a family who runs an esteemed restaurant in Shanghai.

Since his debut as a voice actor in 2006, Okamoto has voiced prominent characters such as Bakugo from My Hero Academia, Ghiaccio in JoJo’s Bizarre Adventure, and Yuu Nishinoya from Haikyu, among others.

Cooking Master Boy has been airing in Japan since October 11. The opening theme of the series, “Kofuku-ron” is performed by Qaijff. The ending theme, ”Paradigm Shift”, is performed by Brian the Sun.

The all-new Cooking Master Boy is directed by Itsuro Kawasaki, who directed all seasons of Cardfight!! Vanguard. Kawasaki is also overseeing the scripts. Saki Hasegawa (Seraph of the End: Battle of Nagoya) is handling character design. The remake is produced by NAS, with animation done by Production I.G.

Cooking Master Boy is a manga series by Etsushi Ogawa, which was serialized in Kodansha’s Weekly Shonen Magazine from 1995 to 1999. In 1997 it was adapted into an anime series. The manga tells the story of Liu Mao Xing, whose mother Pai was known throughout China as the “Fairy of Cuisine”. Anime News Network further describes Cooking Master Boy’s story as such: