A new promotional video for upcoming anime Houkago Saikoro Club (“Afterschool Dice Club”) was released this Friday. The new PV previews the anime’s OP theme song, Present Moment, which was sung by Miyu Tomita. Tomita is also part of the anime’s main cast. Check out the PV below!

The PV also revealed the anime’s October 2 premiere date on the ABC TV channel, and October 3 on Tokyo MX and BS11.

A new visual was also revealed for the anime. 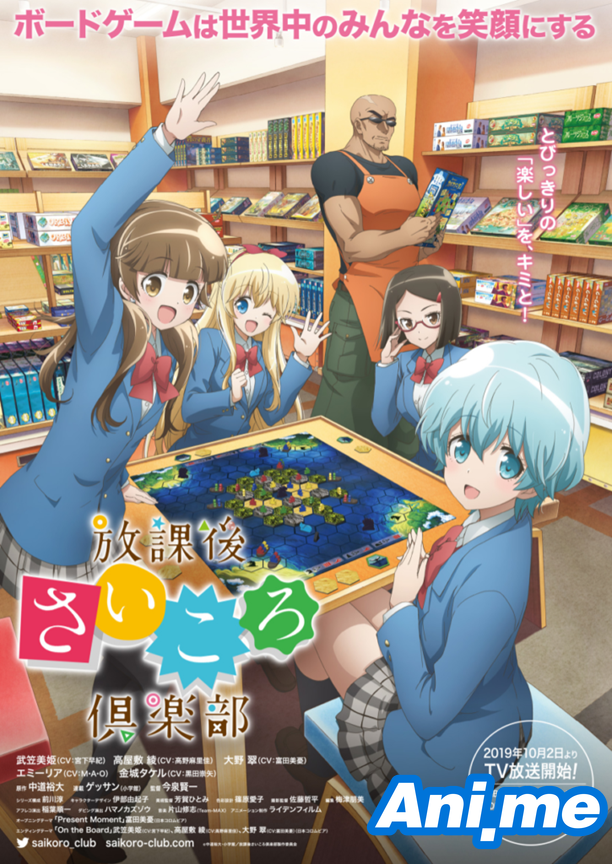 The main cast of the anime are:

• Marika Kono as main protagonist Aya, a transfer student at an all-girls school in Kyoto
• Saki Miyashita as the introvert Miki, who becomes Aya’s first friend in her new school
• Miyu Tomita as Midori, the class representative of Aya’s class
• Takaya Kuroda as Takeru Kinjo, who manages the board game café “Saikoro Club”
• M.A.O. as German transfer student Emilia

Houkago Saikoro Club will be directed by Kenichi Imaizumi, who also directed anime series such as Komori-san Can’t Decline and Reborn!. Series composition will be done by Atsushi Maekawa (Prince of Tennis, Hunter x Hunter) while character design is helmed by Yukiko Ibe (Magical Girl Ore, Onigiri). Music will be composed by Shuji Katayama (Overlord, Saga of Tanya the Evil). The anime series will be produced and animated by LIDEN FILMS.

While the OP will be performed by Miyu Tomita alone, in the ED theme Tomita will be joined by two other cast members: Saki Miyashita and Marika Kono.

Houkago Saikoro Club is a manga series written by Hiro Nakamichi, which was first serialized in the Monthly Shonen Sunday in March 2013. Anime News Network describes the manga’s story as such:

”The manga centers on Aya, who moves and starts to attend an all-girls high school in Kyoto. Her first friend is her reserved classmate Miki. After school one day, the committee chairwoman Midori takes them both to an analogue game specialty shop called “Saikoro Club” (Dice Club). There, they start playing a German board game without thinking. Thus begins Aya and Miki’s search for fun through the world of analogue games.”