Get ready for more epic cooking battles and the much-awaited culmination of the Central arc, as Food Wars: Shokugeki no Soma has been confirmed to return for a fourth season! The announcement was made in the 29th issue of Shueisha’s Weekly Shonen Jump magazine, along with a new visual for the fourth season. Check it out below! 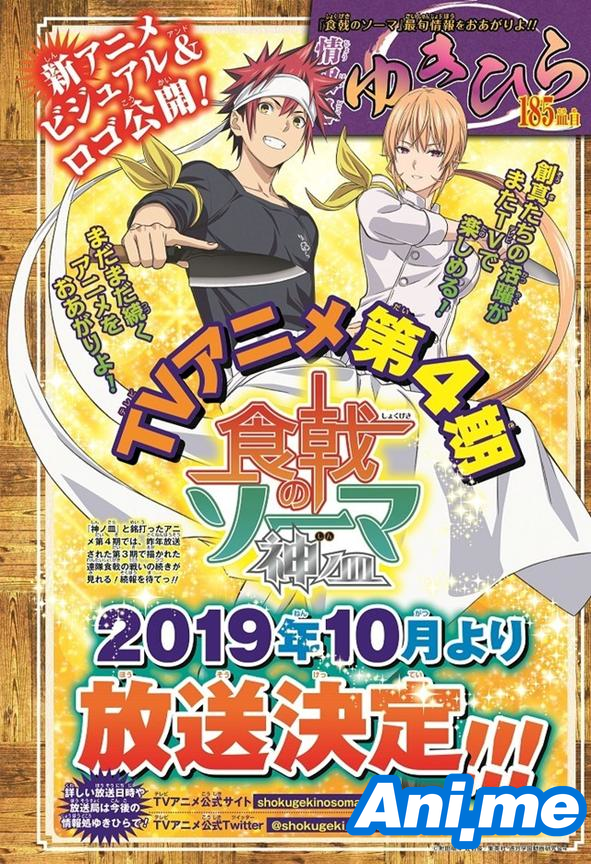 Warner Bros., which holds the English distribution rights for the anime, released a recap video of the past seasons that also served as a teaser PV to Shokugeki no Soma’s 4th season.

While the manga has already ended its run in the Weekly Shonen Jump, it was also announced that the series will release three more chapters in another magazine, Jump Giga. The three new chapters will be collectively called Shokugeki no Soma: Le dessert, and will run starting June 27.

Food Wars: Shokugeki no Soma is written by Yuto Tsukuda, with illustrations by Shun Saeki. It was first serialized in the Weekly Shonen Jump in November 2012, with 35 tankobon volumes already released so far by Shueisha. The series received an anime adaptation from JC Staff, with the first season airing from April to September 2015 and the second season airing from July to September 2016. The third season was divided into two cours and was released from October to December 2017 and from April to June 2018.