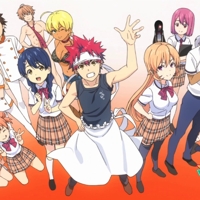 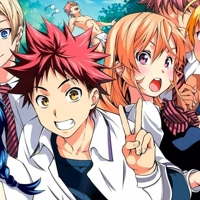 Since early childhood, Soma Yukihira has been assisting his father Joichiro run their family’s diner. Throughout the years, he has challenged his father’s culinary skills in cooking showdowns, and has lost every single one of their 50 matches. Despite this, he strives to improve his cooking, often experimenting with new recipes.

After declaring his desire to become a full-time chef, his father decides to send him to a prestigious cooking school, called Totsuki Culinary Academy, where only 10% of the students graduate. He meets other students who are also extremely talented in cooking, and their cooking skills are put to the test as they struggle to survive the harsh lifestyle inside Totsuki Culinary Academy.

Shokugeki no Soma is the anime adaptation for the cooking comedy manga series under the same name, written by Yuto Tsukuda and illustrated by Shun Saeki, in collaboration with Yuki Morisaki who provides the recipes shown in the series. Produced by J.C. Staff studio, the anime series aired a total of 37 episodes (divided into two seasons, plus 4 OVAs), between April 3,2015 and September 24, 2016.

Soma Yukihira
Soma Yukihira has never received formal cooking classes prior to his admittance into Totsuki Culinary Academy, but has extensively worked with his father as co-chef in their family diner. He is fond of experimenting and developing new recipes, and had lost more than 50 cooking showdowns against his father. His cocky and nonchalant attitude caused most of the other students in the academy to hate him, especially Erina Nakiri.

Megumi Tadokoro
Megumi Tadokoro is Yukihira’s partner in most activities, and is also his first friend since admittance to the academy. Due to her poor social skills and stage fright, Megumi struggled through most graded tests and earned failing grades. She was one failing grade away from expulsion prior to being assigned with Yukihira. She dreams to become an excellent chef one day, and help her family’s traditional inn. As a result, her cooking is geared towards hospitality and familial love.

Erina Nakiri
Erina Nakiri is granddaughter to Totsuki Culinary Academy’s director. Due to her regal pedigree, she detests those who she judges as “common people”, which was her primary reason for rejecting Soma’s application. Being a member of the Elite Ten, Erina’s cooking skills are superb, and she possesses a talent called “God Tongue”, which allows her to identify and describe the ingredients of a dish.

Ikumi Mito
Ikumi is one of Erina’s several followers, who specializes in dishes involving meat. Her family owns a very successful meat production business, which gives her access to the most potent meat available in the market. She is considered beautiful by most students, and is known to cook in a bikini like attire.

Episode 1: An Endless Wasteland
Soma Yukihira and his father compete with each other in a cooking showdown, to which the customers always enjoy watching. As usual, Soma loses to his father’s superb talent, but learns to improve his cooking every match. Later in the episode, his father decides to close their family diner and work abroad instead. He is sent to Totsuki Culinary Academy, an elite cooking school known for its high standards.

Episode 2: God Tongue
Soma arrives at the Academy, and meets the examiner, Erina Nakiri, granddaughter of the school’s director. She is a renowned judge due to her “God Tongue”, a talent which enables her to identify and describe the ingredients used in any dish she tastes. Everyone who were about to take the exam except Soma, recognized Erina and instantly flee. Due to her hateful attitude towards “common people”, she rejects Soma’s application even though being secretly impressed with his cooking. Later that day, Erina’s grandfather overrules her decision after tasting Soma’s dish.

Episode 3: That Chef Never Smiles
Soma’s life inside Totsuki Culinary Academy begins. He is paired with Megumi Tadokoro, a shy and timid girl, who is apparently on the brink of expulsion due to her poor grades. The duo is tasked to cook a certain meat dish, which will be judged by the notorious Roland Chapelle, a teacher known to have given many students a failing grade. Soma and Megumi’s dish were then sabotaged by their classmates, but they still somehow managed to cook an impressive dish, earning them a passing grade from Chapelle. Chapelle smiles for the first time after tasting Soma and Megumi’s dish, expressing that he regrets not being able to give a grade higher than A.

Episode 4: Maria of the Polar Star
After his regular classes, Soma proceeds to find his dormitory. He arrives at Polar Star Dormitory, where he is welcomed by Fumio, an old lady who acts as the dormitory’s caretaker. Before being officially accepted into the dormitory, Soma is faced with a challenge to cook a dish that will impress Fumio, to which he was ill-prepared and had no ingredients. Fumio permits him to use the leftover ingredients in the kitchen, and manages to make a mackerel burger that earned him official residency. Soma befriends the dormitory’s residents, and learns that there exists a school ranking called the Elite Ten. He also meets Satoshi, who happens to be a member of the Elite Ten.

Episode 5: The Ice Queen and the Spring Storm
After challenging Satoshi’s position in the Elite Ten, he was rejected and Soma is introduced to a high-stakes cooking showdown called the Shokugeki. The competitors battle within agreed conditions and bet their valuable possessions. Erina is later shown in the episode who crushes her opponent in a Shokugeki, and won the rights to demolish another school club for her own expansion project.

Episode 7: A Quiet Don, An Eloquent Don
The Soma vs Ikumi Shokugeki commences. With the help of her specialization and massive meat production business of their family, Ikumi effortlessly cooks a superb meat dish, instantly earning praise from the judges. Restricted by the DRS’ budget, Soma is only able to afford discounted supermarket beef, which creates a huge gap in terms of ingredient quality against Ikumi’s high grade meat. Initially mocking Soma’s choice of ingredients, the judges soon find themselves unable to stop eating his dish due to its deliciousness, and giving Soma his first Shokugeki victory. As per agreement, Ikumi joins DRS, only to find out that Soma will not be joining that club, and that he was only interested in developing a new donburi dish, leaving her pissed and embarrassed.

Episode 8: The Concerto of Inspiration and Imagination
The dreaded training camp for the freshmen students finally arrive. It is known that more than half of the freshmen do not survive this training camp and are expelled. With their hopes and dreams of becoming chefs on the line, Soma and his friends’ cooking skills will surely be put to the test.

With its excellent animation, the series displays many delicious dishes that will surely make you hungry. Here are some of the dishes that were shown in the series:

Transforming Furikake Gohan
This was the dish Soma cooked for Erina during the entrance examination. It is the 8th dish in the Yukihira Restaurant secret menu. Outside Japan, Furikake can also be found in the US, particularly in Hawaii or the West Coast, and is mainly used as seasoning for baked or dried fish, raw fish salads and snack foods.

Roast Pork, Just Kidding
This was the innovative dish prepared by Soma after Yaeko sabotaged his ingredients and threatened to demolish their family’s diner. It involves wrapping mashed potatoes with thick bacon, in order to create an artificial roasted pork.