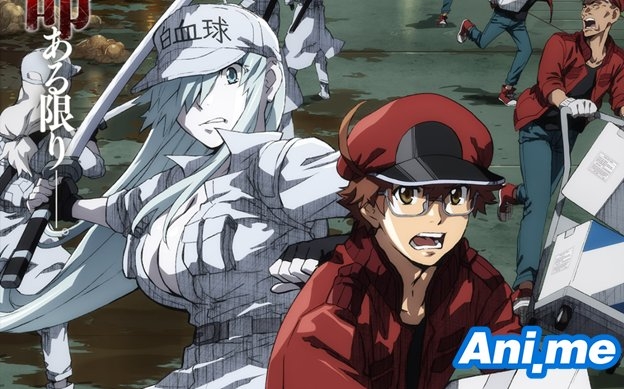 Rock band POLYSICS revealed last weekend that they will be participating for the upcoming TV anime series of the Cells at Work! spinoff, Code Black, by providing a theme song to the series! According to the band’s website, they created the song Hashire! with Yamasaki Seiya (Kyūso Nekokami) specifically for the series. The song is a collaboration with Yamasaki Seiya, vocalist of the Kyuso Nekokami band.

Code Black will be directed by Hideyo Yamamoto (Magical Girl Spec-Ops Asuka), with Hayashi Mori (The Snack World) supervising and writing the scripts. Character design will be done by Eiji Abiko (Last Hope) with Yuugo Kanno (Psycho-Pass) composing the music.

Kodansha Comics holds the English license to the manga, which describes Code Black as such:

In this new spinoff of the hit manga, a newbie Red Blood Cell is one of 37 trillion working to keep this body running. But something’s wrong! Stress hormones keep yelling at him to go faster. The blood vessels are crusted over with cholesterol. Ulcers, fatty liver, trouble (ahem) downstairs… It’s hard for a cell to keep working when every day is a CODE BLACK!

The manga and anime Cells at Work! showed you what happens when a young, healthy body gets in trouble… but what if the body wasn’t so young, and was never very healthy? This new take stars a fresh-faced Red Blood Cell and his friend, the buxom White Blood Cell, as they struggle to keep themselves and their world together through alcoholism, smoking, erectile dysfunction, athlete’s foot, gout… it’s literal body horror! Whoever this guy is, he’s lucky his cells can’t go on strike!