Good news to fans of Hololive, as we’re getting more songs from the EN branch! In a special livestream this Thursday, resident chicken phoenix and KFP tenchou (manager) Takanashi Kiara announced that she is getting her first-ever solo single! The single is entitled Hinotori, which when written in kanji loosely translates to phoenix. The official title of the release, however, will be written in romaji (i.e., English letters) as requested by Kiara herself.

Kiara also revealed the cover art for her upcoming single which was drawn by illustrator Huke, who she affectionately calls “papa” (this is because he was the one who designed her character). Besides designing her, Huke is also known for working on the Steins;Gate visual novel as well as doing illustrations for Black Rock Shooter. Check out the cover art below! 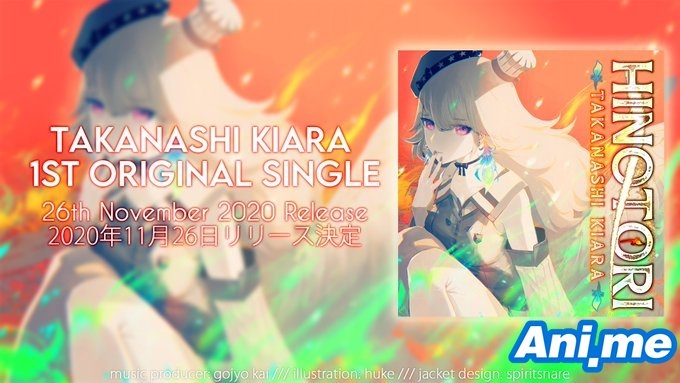 The single is set for a November 26 release in her Youtube channel first, with release in Spotify, iTunes and other music sites “soon after”. Kiara also shared during her livestream that fellow Hololive EN member Mori Calliope is making the music video for the song (TAKAMORI shippers, yes, RISE UP). The song is composed by SYNC. ART’S Gojou Kai.

Our favorite tenchou also previewed the song’s chorus during the livestream. It sounds really good so far, so check it out here!

Besides the release of her 1st single, Kiara also announced the release of a special voice pack for her fans which can be purchased via Booth on November 26 as well (voice packs are basically recordings of special messages to fans). She also revealed a new talk show hosted by her entitled HOLOTALK with Takanashi Kiara, with her first guest being 3rd generation Hololive JP member Houshou Marine.

Hololive Production or simply Hololive is a virtual Youtuber talent agency owned by Cover Corp. The company debuted its first talent, Tokino Sora, in 2017, with subsequent generations and talents debuting soon after in Japan. The company debuted the English branch, Hololive EN (dubbed as holomyth) on September 8, 2020 with five members: Mori Calliope, Takanashi Kiara, Ninomai Ina’nis, Amelia Watson, and Gawr Gura. Of the five of them Gawr Gura was the first to reach 1 million subscribers on Youtube.  Mori Calliope had previously released a rap EP entitled Dead Beats, writing the lyrics herself for the song Excuse My Rudeness, But Could You Please RIP?