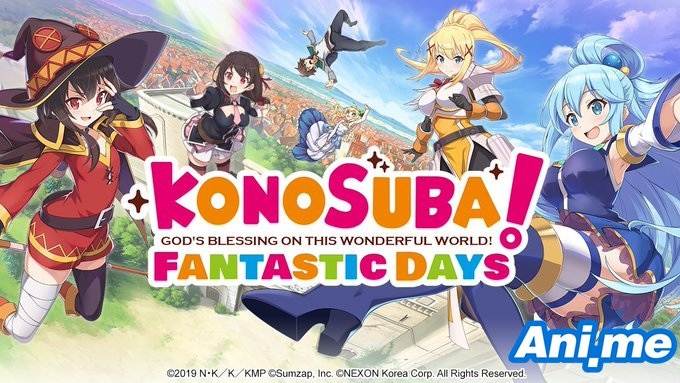 Video game publisher Nexon has just announced that the official smartphone game to the KonoSuba franchise entitled KONOSUBA – God’s blessing on this wonderful world! Fantastic Days – is set for a global release this coming 2021. The worldwide release will make the game available to all Android and iOS devices outside of Japan, China, Hong Kong, Taiwan, and Macau.

The game was released in the previously-mentioned countries last February 27.

According to press releases, the KonoSuba smartphone game is a party-based battle RPG which features an original story. The game is fully voiced too, featuring fan-favorites such as the Kazuma, Aqua, Darkness, Megumin, Wiz, Yunyun and more.

The game is developed by Sumzap.

Kono Subarashii Sekai ni Shukufuku wo! started out as a web novel series in 2012 written by Natsume Akatsuki. Eventually the web novel was revised to be a light novel series and was published under Kadokawa Shoten’s Kadokawa Sneaker Bunko Imprint from October 2013. The light novel already ended last May with the release of its 17th volume. It also received a manga adaptation in 2014 which was illustrated by Masahito Watari and Jospeh Yokobori and was serialized in Fujimi Shobo’s Monthly Dragon Agemagazine. KonoSuba eventually made the jump to TV when it was adapted into an anime series by Studio Deen, with the first season airing from January to March 2016 and the second season from January to March 2017. A film entitled Kono Subarashii Sekai ni Shukufuku wo! Kurenai Densetsu (God’s Blessing to this Wonderful World: Legend of Crimson) premiered in Japan on August 2019.

The story centers on a NEET (Not in Education, Employment or Training) teenager named Kazuma Sato, who is sent to a fantasy world after an untimely death and forms an unlikely party with a (useless) goddess, a firecracker-addicted wizard, and a masochistic crusader to fight against monsters and the Devil King.