And we now have an exact premiere date folks, as an announcement during the “Fuji TV Anime Lineup Press Conference” this Thursday revealed that the much-awaited second season of The Promised Neverland is now slated for a January 7, 2021 release! 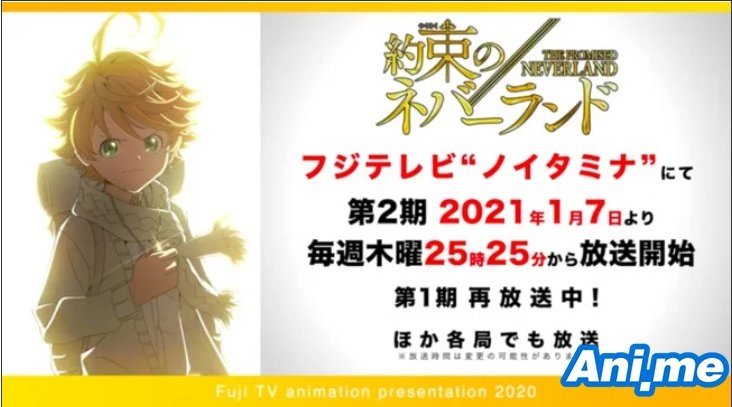 The second season was initially slated for an October 2020 premiere, but was delayed due to the current COVID-19 pandemic.

Besides a second season, The Promised Neverland will also be getting a live-action film adaptation which is set for a December 18, 2020 release. Check out the film’s full trailer here!

The Promised Neverland is a manga series written by Kaiu Shirai and illustrated by Posuka Demizu, which was serialized in Weekly Shonen Jump from August 2016 to June 2020. An anime adaptation of the series was first announced in 2018 and aired from January to March 2019 in Fuji TV’s late-night Noitamina anime block. The 12-episode anime series was animated by CloverWorks and directed by Mamoru Kanbe, with series composition by Toshiya Ono, character designs by Kazuaki Shimada, and music by Takahiro Obata. A second season was announced on the anime’s last episode last year.

For its second season, the story will now focus on Emma and the other Grace Field children’s life outside the house, after managing to escape in season 1. Literally a whole new world opens up before the children, and they (along with us) will finally find out what really lies outside the world they were kept in for so long.