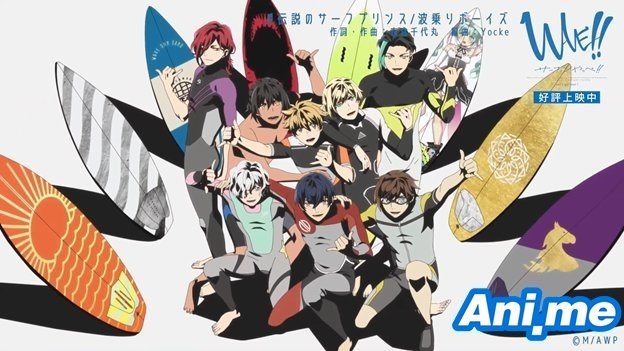 The official website of the mixed-media surfing-themed franchise WAVE!! has released the opening song sequence for the first film in the trilogy—along with the raw storyboards for the sequence! Check out the cool video here!

The trilogy movie will open in theaters one after another on October 2, 16, and 30.

The opening theme sung is sung by all characters of the film, collectively named as the Naminori Boys (“Surfing Boys”, abbreviated as NBS). The voice actors of the first two characters in the trailer, Masaki Hinaoka and Shou Akitsuki, sing the ending theme song Beat Blue Beat.

The eight main cast members are:

Original work for the anime is credited to MAGES. The anime films will be directed by Takaharu Ozaki (Girls’ Last Tour, Goblin Slayer), with Kazuyuki Fudeyasu (Girls’ Last Tour, Black Clover) in charge of series scripts. Original character designs are done by Yomi Sarachi (La storia della Arcana Famiglia), with Tomoko Iwasa (Hakumei and Mikochi) adapting those designs for animation. The movies will be helmed at Asahi Production.

WAVE!! is set in the real-life city of Oarai in Ibaraki prefecture. The story centers on Masaki Hinaoka, whose new friendship with transfer student Shou Akitsuki introduces him to the world of surfing. Through the sport, Masaki will make new friendships and abandon old ones as he drift towards adulthood.

Love&Art is developing the project under the supervision of the Nippon Surfing Association, Surf Magazine, and in cooperation with Murasaki Sports.