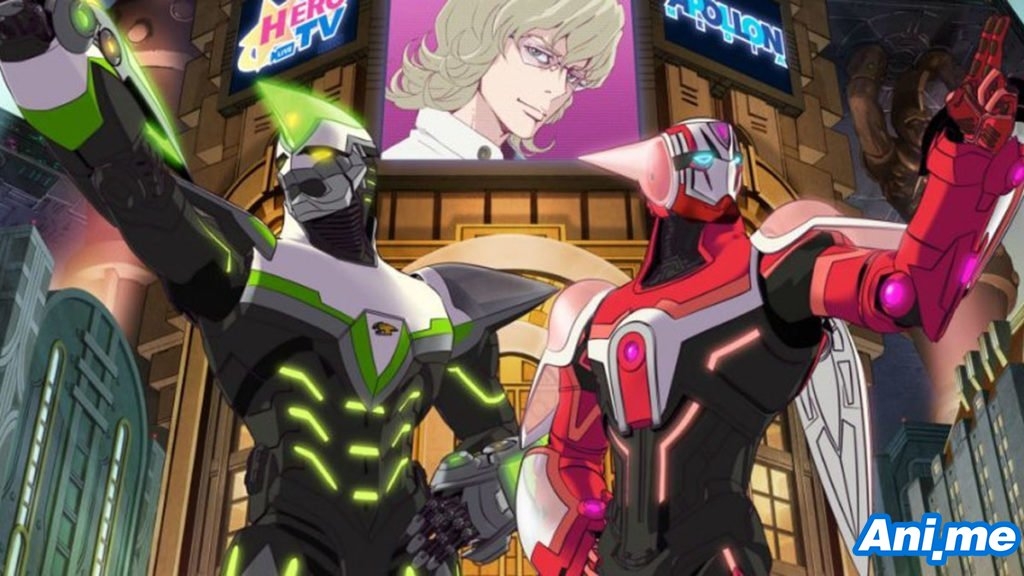 If you’ve watched the first Tiger & Bunny anime, you would notice that each of the characters have product brands on the parts of the characters’ hero suits. Ever since the announcement of the 2nd season of the anime, lots of brand wished to have their brand to be part of the upcoming anime.

Last October 1 to 7, the anime’s official website posted a open call for brands to sign up for a product placement deal. The end result was dozens of big name companies signed to get their brands to be part of the anime. They event took to Twitter to express their interest. Companies like  electronic scales maker Tanita, electronics manufacturer Sharp Corporation, stationery company King Jim, and department store chain TOKYU HANDS took their chance.

Some of these companies wanted to get into the product placement deal so bad that some took to Twitter to share their geekiness of the anime. Stationary company King Jim said on their official Twitter that, “Personally, I'm a Blue Rose fan. The gap between her hero work and her private demeanor is irresistible."

The long wait is finally over—Sunrise’s popular anime series Tiger & Bunny is finally having a Season 2. The announcement was made official on the franchise’s official Twitter account. There is still a little bit of wait as the anime is scheduled to premiere in 2022.

Fans of the anime are in for a treat as the original respective voices of Kotetsu and Barnaby Hiroaki Hirata and Masakazu Morita will return to voice again for season 2.

A live-action Hollywood film adaptation of the anime is in the works. Both Ron Howard and Brian Grazer of Imagine Entertainment are confirmed as producers. No further development in this project as been released so far the film’s studio Global Road filed for Chapter 11 bankruptcy in September 2018.

About Tiger and Bunny

In Stern Bild City, those with special abilities are called "NEXT," and can use their powers for good or bad. A unique organized group of NEXT appear regularly on Hero TV, where they chase down evildoers to bring limelight to their sponsors and earn Hero Points in the hopes of becoming the next "King of Heroes."

Kotetsu T. Kaburagi, known as "Wild Tiger," is a veteran hero whose performance has been dwindling as of late, partially due to his inability to cooperate with other heroes. After a disappointing season in which most of the other heroes far outperformed Tiger, he is paired up with a brand new hero who identifies himself by his real name—Barnaby Brooks Jr.

Barnaby, nicknamed "Bunny" by his frivolous new partner, quickly makes it clear that the two could not be more different. Though they mix as well as oil and water, Tiger and Bunny must learn to work together, both for the sake of their careers and to face the looming threats within Stern Bild.

About Tiger & Bunny the Movie: The Beginning

The first half of the movie retells the events of the first two episodes of the TV series with a few additional scenes. Following the events of the second episode, Kotetsu tries to arrange a get together for Barnaby to get along with the other heroes, which ultimately fails due to them considering themselves rivals on Hero TV. The heroes are soon called in to chase after a thief named Robin Baxter, who has stolen a statue that represents the importance of heroes. The heroes chase after him into an amusement park but find him near-impossible to catch due to his NEXT ability, leading to infighting among the heroes. As Robin heads towards the observation deck, where he could use his power to escape, Barnaby gets the idea that allows him to catch Robin. The next day, Barnaby learns that it was Kotetsu who helped convince the other heroes to let Barnaby go on his own as he trusted him.

After the crisis is over, Kotetsu is forced to treat the other heroes to another hangout as repayment for asking them to let Barnaby capture the criminal.

About Tiger & Bunny: The Rising

Some time after the events of the series, Kotetsu and Barnaby have become part of the Second League to train new heroes. However the Second League heroes are widely unsuccessful in their tasks, as Barnaby is the only one able to bring petty criminals to justice. As Kotetsu express his doubts of doing hero work while his Hundred Power is declining, the Second League is also in trouble as the ongoing losses are forcing Apollon Media to consider cutbacks. The cutbacks are averted with two blessings: Mark Schneider, a famous CEO capable of turning even the worst business around to making a profit, and foreign NEXT hero Golden Ryan. Schneider buys Apollon Media and promotes Barnaby back to First League with Ryan as his partner, then cancels the Second League and fires all the Second League heroes - including Kotetsu.

Meanwhile, the Justice Day Festival - celebrating Sternbild City's Goddess of Justice - is approaching. As Barnaby visits the orphanage to drop off toys and donations, one of the nuns tells the story with a picture book. The Goddess of Justice, unhappy with the greed of man, sent curses upon them to teach them a lesson. As the festival approaches, strange incidents begin occurring that mimic the goddess's curses from the legend, and three mysterious new NEXT appear.