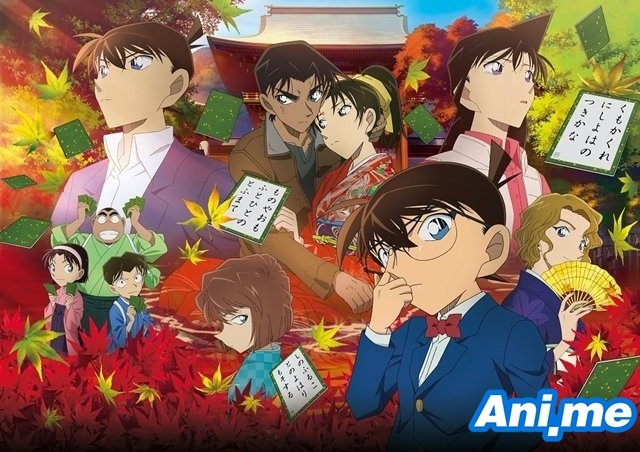 Discotek has more in store for anime fans as they have announced this week that they will be releasing more anime on Blu-ray. The following titles are: Lupin III: Tokyo Crisis, Gin Rei, Detective Conan: The Crimson Love Letter, Devilman Lady, and Thermae Romae. All mentioned titled will be released on December 29. The company will also release both the television anime series and OVA of Battle Athletes on the same day.

The release of the Lupin III: Tokyo Crisis anime special’s Blu-ray Disc release will have the Japanese version with English subtitles, and the English dub done by Funimation.

Lupin & co. attempt to steal two face plates from millionare Michael Sizuki, thinking that they will lead to an ancient treasure when brought together. However, it soon becomes apparent that there is more behind the plates then meets the eye.

In episode one, Ginrei's dress is stolen, only to be used to fool the enemy. The second episode deals with a giant robot made exactly in her image. Finally, the third episode concerns Tetsugyu and Ginrei investigating a lost research team in a "wild west" desert setting.

A bombing case at Nichiuri TV in autumn. The Satsuki Cup, which crowns the winner of Japan's Hyakunin Isshu, is currently being filmed inside the facility. The incident results in a big commotion and, while the building is burning to ashes, the only people left inside are Heiji and Kazuha. They get rescued just in time by Conan, who rushes to the scene. Both the identity and purposes of the bomber are unknown.

While confusion takes over due to the explosion, Conan meets a mysterious beautiful girl who claims she is "Heiji's fiancée". Her name is Momiji Ooka and she is the Kyoto High School champion of the Karuta game. As fate would have it, Kazuha is going to face Momiji in the Hyakunin Isshu, so she begins to train with the help of Heiji's mother, Shizuka, who is a skilled Karuta player.

At the same time, in a Japanese house in Arashiyama, Kyoto's outskirts, the reigning Satsuki Cup champion is murdered. Pictures of the crime scene reveal Momji's presence. Additionally, several Karuta cards were spread around the victim.

Conan and Heiji, along with the Osaka and Kyoto police departments, begin their investigation on the Satsuki Cup and the related murder case. As the inquiry goes on, they come across a secret connected with the Hyakunin Isshu.

Fudo Jun is a beautiful supermodel who is idolized by many. She also has a dark secret that not even she knows about at first, for within her veins run the genes that hold the next step in the evolution of mankind. The same blood as the beastlike superhumans that terrorize the city. Unlike the rest of them, though, Jun has managed to hold a tenuous grip onto her humanity, and she is recruited by the mysterious Asuka Ran, member of a secret organization within the government, aimed at controlling, if not eliminating, these berserk destroyers of mankind. Jun, as Devilman Lady, must now exterminate her own kind, but how much longer can she keep her sanity in a situation she never chose in the first place?

Lucius Modestus, an ancient Roman architect, finds himself job-hunting due to having trouble coming up with new ideas. As his demeanor and personality become dismal, his friends try taking him to a bathhouse for him to relax. Unable to unwind in the bustling and crowded bath, Lucius dips his head in the water. Down there, he finds a secret tunnel that transports him to a modern-day Japanese bathhouse, providing him the inspiration he needed to make a new creation.

Loaded with what seems to be knowledge way ahead of his time, Lucius does his best to try and recreate his findings, usually inferior in quality due to his circumstances. However, the sheer ingenuity may be just enough to gain the attention of the citizens and regain his reputation as an architect.

Akari Kanzaki has just joined an all-girls academy in hopes of entering the University Satellite, an elite sports training facility. She wants to win the title of Cosmo Beauty - a title held years ago by her mother. It's not an easy task for her as fear, doubt and peer pressure get in her way, but friends, rivals and fans slowly encourage her to overcome her obstacles and become the best of the Battle Athletes.