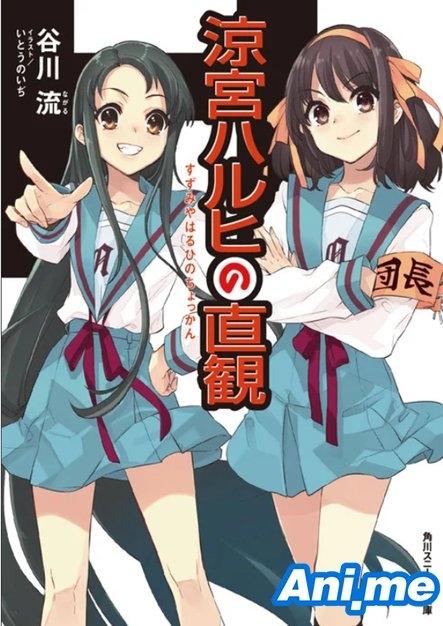 The new novel will be entitled Suzumiya Haruhi no Chokkan (The Intuition of Haruhi Suzumiya) and is the first novel for the series in almost nine and a half years.  The new volume is set for a November 25 release in Japan, with simultaneous release for English-speaking readers courtesy of publisher Yen Press. The release will be collecting three stories, along with a new one. The novel will include the Nana Fushigi Overtime (Seven Wonders Overtime) short story that debuted in the one-time magazine The Sneaker Legend in 2018 and the Atezuppo Numbers story that appeared in Noizi Ito’s artbook in 2013. Together with these stories is the new story entitled Tsuruya-san no Chousen (Tsuruya’s Challenge).

The Melancholy of Haruhi Suzumiya is a light novel series written by Nagaru Tanigawa and illustrated by Noizi Ito. The series was published from 2003 to 2011, with more than 20 million copies in print. The series was adapted by Kyoto Animation into a two-season TV anime in 2006 and was aired in a non-linear order. In 2009, the series was re-broadcast with new episodes and in chronological order.

Anime News Network describes The Melancholy of Haruhi Suzumiya as such:

“On the first day of high school a beautiful girl named Haruhi Suzumiya introduces herself as having “no interest in ordinary humans”. She asks for any aliens, time travelers, sliders or espers to join her. Watching her weird behaviour is Kyon who sits in front of Haruhi and is the only person who talks to her. When Kyon comments about Haruhi’s joining every club in school and then quitting he unwittingly gives Haruhi an idea to start her own after school club. Thereafter Kyon and several others find themselves dragged, literally, into the Save our world by Overloading it with fun Suzumiya Haruhi’s Brigade (the S.O.S. Brigade for short).”