The hype is very much real for the upcoming film adaptation of Bleach author Tite Kubo’s one-shot-turned-chaptered manga Burn the Witch! A new promo video was recently unveiled for the movie, which previews the theme song Blowing by NiL. Check out the video here!

In addition to a new promo video, author Tite Kubo also announced a “season 2 manga” for Burn the Witch! The announcement, which was revealed in this year’s 41st issue of Weekly Shounen Jump, was announced via the reveal of draft pages for the sequel manga from the author himself. Check it out below! 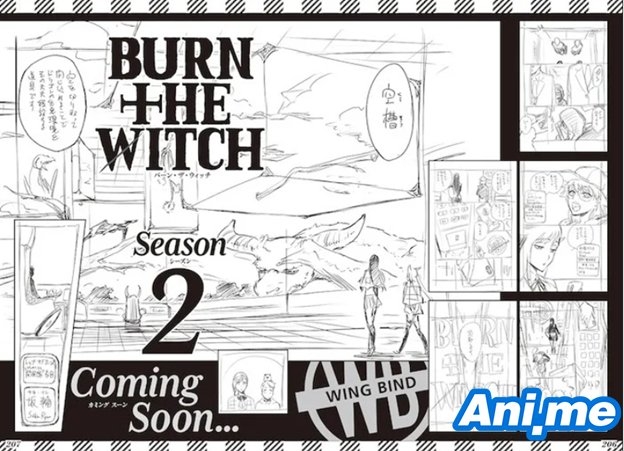 Crunchyroll describes Burn the Witch as such:

“Historically 72% of all the deaths in London are related to dragons, fantastical beings invisible to the majority of the people. While unknown to most, some people have been standing up to these dragons.

Only inhabitants of Reverse London who live in the hidden “reverse” side of London can see the dragons. Even then, only a selected few become qualified enough as witches or wizards to make direct contact with them.

The protagonists of the story are witch duo Noel Niihashi and Ninny Spangcole. They are protection agents for Wing Bind (WB), an organization for dragon conservation and management. Their mission is to protect and manage the dragons within London on behalf of the people.”

The anime film will have special event screenings in Japan on October 2.

Crunchyroll also announced that they will be releasing the anime film in North America, Central America, South America, Europe, Africa, Oceania, Middle East, and CIS. In case you missed it, check out the English-subbed trailer here!

The “mid-length” anime film is directed by Tatsuro Kawano (Gatchaman Crowds) with Chika Suzumura (Yozakura Quartet ~ Hana no Uta ~ ) writing the scripts and Natsuki Yamada (Time Bokan 24) designing the characters. The film is a joint production between Studio Colorido and team Yamahitsuji.

Burn the Witch was originally a one-shot special chapter released in 2018 and is set in the same world as Tite Kubo’s Bleach series. The one-shot was eventually picked up for a serialization, with Shonen Jump announcing that Burn the Witch will have four chapters.