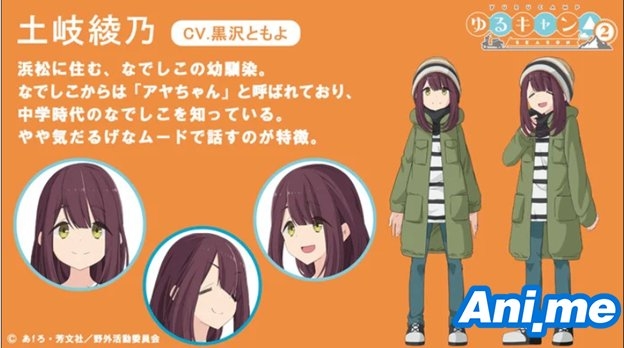 New updates are slowly trickling in for the upcoming second season of Laid-Back Camp (Yurukyan Δ). The TV anime series’ official website revealed this Tuesday that popular voice actress Tomoyo Kurosawa has been cast as Ayano Toki, a new character for season 2. Affectionately called “Aya-chan”, this new character lives in Hamamatsu and is Nadeshiko’s childhood friend up until middle school. The website describes her relaxed way of speaking as her notable trait.

Kurosawa has voiced other popular characters in the past, such as Sound! Euphonium’s Kumiko Omae, Land of the Lustrous’ Phos, and O Maidens in Your Savage Season’s Hongo.

The series received a live-action adaptation which premiered last January. The live-action Laid-Back Camp was directed by Takashi Ninomiya, Mamoru Koshino, and Kyohei Tamazawa. The scripts were written by Ayako Kitagawa.