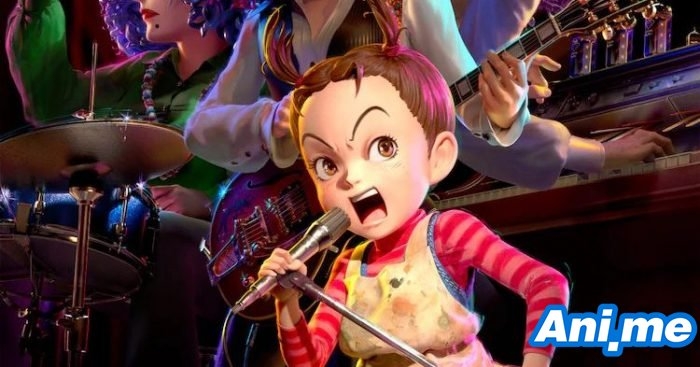 The Mainichi Shimbun’s Mantan-Web quotes him saying playfully, “I didn’t consult with any of the old guys [at Ghibli] at all.”

He then went on to describe the movie’s protagonist Earwig, saying, “She’s a type of heroine who hasn’t been represented in Ghibli until now, and she’s a strong girl who does every conceivable thing to live how she wants to live. She feels an overwhelming pressure and withstands a lot of hardships, yet remains bright throughout it all."

He also stated the movie will be in full 3DCG and continued saying, “I was the only one among the people at Ghibli who knows that method of creation, so I was able to push the project forward without consulting with anyone. Hayao Miyazaki told me to go ahead with it, and producer Toshio Suzuki encouraged me, saying that it seemed like a fine idea, but after that, I was left to my own devices. I was basically abandoned, so I made the anime with a young staff and didn’t consult with the old guys at all."

This is Studio Ghibli’s first CG feature, will be 82-minutes long, and slated to premiere this winter on the NHK General channel in Japan. Goro Miyazaki will be directing the feature while co-founder Toshio Suzuki is its producer.

In case you are not aware, Goro Miyazaki is the son of Studio Ghibli co-founder, Hayao Miyazaki. Goro Miyazaki commented that Japan has more adults than children (that is due to the constant decline of birth rate and longer life expectancy) and said that it’s really touch to be a child today. He thought of this when he stumbled upon the story of Earwing and stated that this is ideal during these hard times. The young Miyazaki hopes that “from the bottom of my heart that our cheeky, yet cute, Earwig will encourage children — and cheer adults up.”

To give you an idea of what the story is about, HarperCollins tells the synopsis of the original novel:

Not every orphan would love living at St. Morwald’s Home for Children, but Earwig does. She gets whatever she wants, whenever she wants it, and it’s been that way since she was dropped on the orphanage doorstep as a baby. But all that changes the day Bella Yaga and the Mandrake come to St. Morwald’s, disguised as foster parents. Earwig is whisked off to their mysterious house full of invisible rooms, potions, and spell books, with magic around every corner. Most children would run in terror from a house like that . . . but not Earwig. Using her own cleverness—with a lot of help from a talking cat—she decides to show the witch who’s boss.

This isn’t the first time that Jones’ work was adapted into animation by Studio Ghibli. In fact, Howl’s Moving Castle (which is based from Jones’ novel of the same name) was adapted into anime film in 2004 and received an Academy Award Nomination for Best Animated Feature.

Studio Ghibli has been a powerhouse in the anime and movie industry for years making blockbuster masterpieces like Spirited Away, Princess Mononoke, Howl’s Moving Castle, and so on.

During the New Year, the studio released their new year’s message. In the greeting, it was also mentioned that they are continuing to work on two new films this year. The first film is what the studio’s co-founder Hayao Miyazaki have been revealed previously, titled Kimi-tachi wa Dō Ikiru ka (How Do You Live?). It was reported by one of the former studio producer Yoshiaki Nishimura that the film is now 15% complete.

Aside from their notable anime feature films, Studio Ghibli produced the 200 live-action feature Jitsu, as well as the 2012 live-action short “Kyōshinhei Tokyo ni Arawaru” (A Giant God Warrior Appears in Tokyo). In a report in 2016, former Studio Ghibli producer Yoshiaki Nishimura said that Miyazaki was planning to produce three more shorts for the Ghibli museum. One of these was Boro the Caterpillar that debuted last year. The current exhibition in the museum titled “Sketch, Flash, Spark! ~ From the Ghibli Forest Sketchbook” did not reveal the next upcoming short after Boro the Caterpillar.

In an essay published in Bugei Shinju magazine on March 2019, former producer Toshio Suzuki said that Miyazaki is working on Kimi-tachi wa Dō Ikiru ka without a deadline. Miyazaki presented a proposed schedule for the production of the film which is slated to be finished by 2019 , but Suzuki said that the studio is no longer following the planned schedule. “With the production of this new film, we’re experimenting with having no established deadline. I’m looking forward to how that comes through in the work.”, he said.

Kimi-tachi wa Dō Ikiru ka is based from the 1937 masterpiece of the same name written by Genzaburō Yoshino. Miyazaki stated that the book has great meaning to the protagonist of the film and the movie is sure to win a lot of people’s hearts. The story centers around a man named Kopera and his uncle. The film talks about how to live as human beings through the spiritual growth of Koperu.

Previously, a news report from Nagoya TV revealed that the long-awaited Ghibli Park is set to start construction this July, with three areas of the park set to open to the public in fall 2022. The news report also showed concept designs of the park as well as aerial video of the construction sites. You may check out the video here.

The park’s construction will be handled by building contractor Kajima Corporation, with expenses estimated to be around 10,657,900,000 yen (USD 98,323,700). The developers also stated that despite the COVID-19 pandemic, they expect no delays to the construction and the park’s first three areas will be finished in time for the scheduled July 2022 opening. Aichi prefecture, which will host the park, has already pledged 31 billion yen (about USD 280 million) for the construction and 3 billion yen (about USD 30 million) for the design and planning process.