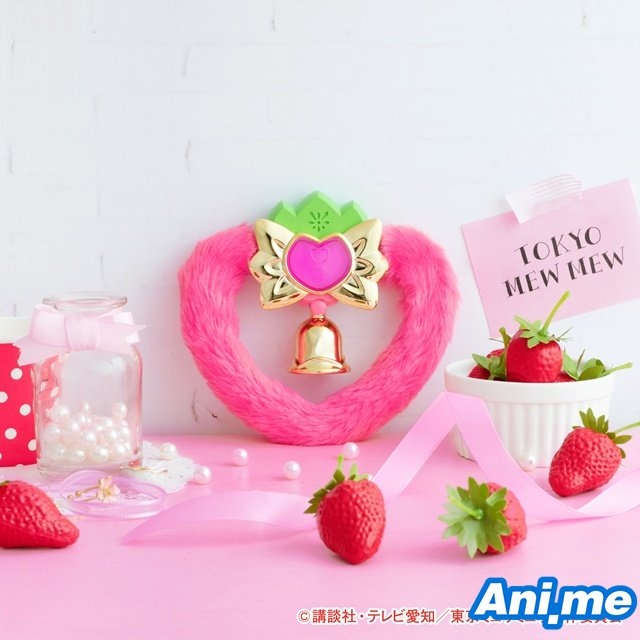 Tokyo Mew Mew has been well-loved by many anime fans. As a way to celebrate its 20th Anniversary, Premium Bandai is selling a recreation of Mew Ichigo’s Strawbellbell in its Japanese online store. You can check it out right here. This one of a kind anime item could be yours at 4,290 yen! (around USD$40!)

This item is definitely a collector’s item, especially for long time fans of the series because it is made with gold plating and pink parts. It will be wrapped up in a special packaging with art of the main character, Mew Ichigo printed on the reverse side.

The item is expected to be released in March 2021. As a way to continue the celebration hype, the capsule vending machines in Japan will start selling Tokyo Mew Mew rubber straps in six varieties beginning in October this year.

It was announced previously that the popular Tokyo Mew Mew manga series is getting a new anime series titled as Tokyo Mew Mew New. This was confirmed after the series’ website countdown revealed more information about the project.

The announcement of the new anime of the franchise coincides with the manga series’ 20th anniversary and 65th anniversary of Nakayoshi magazine, in which the manga was originally serilized.

An event called “Tokyo Mew Mew New Seiyū Idol Auditions” was announced on the website as they opened voice actor auditions to fill the role of Ichigo Momomiya. Auditions will run through spring until summer and interested applicants may send in their applications to the app mysta. This is open for elementary school to 30 years old females.

One of the creators of the Tokyo Mew Mew manga Mia Ikumi released a comment that she is surprised that the series will be having a new anime and asked the anime staff who will be handling the production to do their best.

In a previous report, it was revealed on Saturday that the January issue of Nakayoshi magazine would release a new series titled Tokyo Mew Mew Ore. The manga is slated to be released in the said magazine issue next year. The new Tokyo Mew Mew manga series will be centering on male characters instead of the female leads that a lot of us have grown to love years ago.

The manga launched with the first chapter to be at 62 pages with a colored opening page. This new manga series is created by Madoka Seizuki. Kodansha is credited for the original work.

Tokyo Mew Mew is centered on an ordinary girl named Ichigo who went out on a date with her crush when suddenly she gets involved in an odd incident where her DNA gets merged with a DNA of an almost extinct wildcat. It’s not only her, of course—other four people also get their DNA merged with other four extinct animals. They all soon found out that they were part of a bigger plan as they were chosen to become part of a secret project called the “Mew Project.” Their mission to protect the planet from aliens who will be using animals to hurt human beings.

The manga series had a sequel titled Tokyo Mew Mew à La Mode, which was published from April 2003 until February 2004 in Nakayoshi magazine. The manga was then compiled into volumes. It was also released in English by Tokyopop.

In the manga sequel, it centers on both Ichigo and Masaya moving to England to study endangered species. While they were away, the remaining Mew Mews continue to stop the Chimera Animas, which was the left by the aliens. They then faced new adversaries, which are the Saint Rose Crusaders, humans with special powers with an ambition to conquer the world and create a utopia while taking over the remaining Chimera Animas.

The series then introduces us to a new Mew Mew called Berry Shirayuki and immediately takes the role of Ichigo as leader. While Ichigo was fused with only one DNA of an endangered animal, Berry is the first Mew Mew to be infused with two endangered species, specifically an Andean mountain cat and Amami rabbit. She is the main target by the Crusaders, as she is the strongest Mew in the group. The further chapters then bring back Ichigo to help during their battle. When the two Crusaders hypnotize the citizens of Tokyo to go against the Mews, both Berry and her new childhood friend Tasuku Meguro use their feelings of love to reverse the hypnosis, which also caused the Crusaders to have a change of heart as well.

A lot of people have commented that the manga series has been a part of their childhood, saying that it’s one of those popular mahou shoujo series to follow aside from the popular magical girl series hit Sailor Moon. The Sailor Moon manga ended in 1997, while the Tokyo Mew Mew manga was first published in 2000. You might say that this series is like a Sailor Moon-inspired series as it has all the basic elements of being a magical girl series.

The popularity of the Tokyo Mew Mew series has also paved the way to an anime adaptation created and produced by Studio Perriot. The anime premiered in Japan on April 6, 2002 and ended on March 29, 2003 with a total of 52 episodes.

Some of you have probably remembered this series well due to its English dub by 4Kids Entertainment. The anime was released in the US, but only 26 of the 52 episodes were aired. This version of the anime was also infamous due to its heavy editing from its story and dub. While it’s notable for its usual name Tokyo Mew Mew, 4Kids aired the anime as Mew Mew Power. When the time the anime was released for the English-speaking audience back in the day, it was well-received, and it even has a very loyal following until this day.