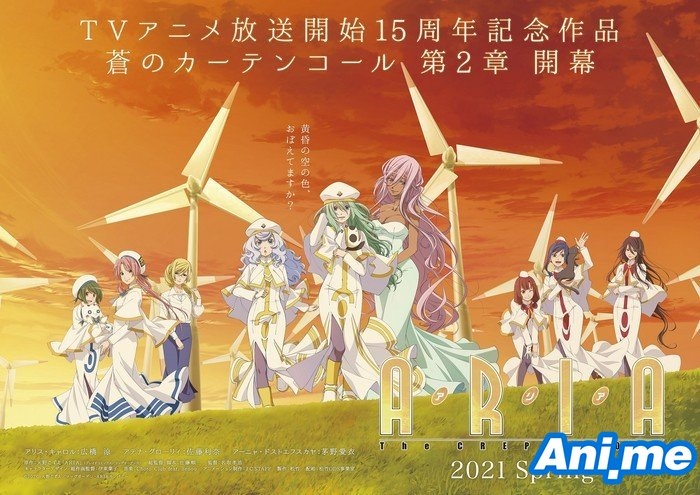 We now have news on the Aria 15th anniversary special project! The official website for the film has revealed that the title of the project will be Aria the Crepusculo, and the film is set for a spring 2021 release. A teaser trailer has also been unveiled on the website. Check out the video here!

The new project will be produced by Hisao Iizuka, who announced that character Athena Glory will now be voiced by Rina Sato (Mikoto Misaka in A Certain Magical Index/A Certain Scientific Railgun). Sato is replacing Tomoko Kawakami, who passed away in 2011. Ryou Hirohashi and Ai Kayano will be reprising their roles as Alice Carroll and Anya Dostoyevskaya, respectively.

Junichi Sato, who directed all Aria anime series, returns as chief director and scriptwriter. Former episode director and story boarder Takahiro Natori is now director. Character design and animation direction will be handled by Yoko Ito, while Takeshi Senoo returns as musical composer. JC Staff will be handling the animation and Shochiku is producing the film.

Aria the Animation was adapted from the Aria manga series written by Kozue Amano that ran from 2001-2008. Studio Hal Film Maker adapted the manga series into three seasons: Aria the Animation (2005), Aria the Natural (2006), and Aria the Origination (2008). An original video animation (OVA) entitled Aria the OVA ~ Arrieta ~ was also released in 2007. All of these installments for the Aria franchise were directed by Junichi Sato (Sailor Moon, Princess Tutu).

Right Stuf’s Nozomi Entertainment holds the English license release for Aria, and describes the 2005 series as such:

“Akari Mizunashi, at the age of 15, has left everything behind to travel to a sparkling planet covered in water, Aqua, formerly known as Mars. By the 24th century, humans have found a way to colonize the formerly uninhabitable planet.

More than anything, Akari wants to be an “undine” – a female gondolier who navigates the canals of the Aquan city of Neo-Venezia. The city itself is a faithful replication of Manhome’s (Earth) city of Venice. To make sure that residents and tourists alike get the most from Neo-Venezia’s many wonders, companies offering guided tours via gondola were formed, one of which is named Aria Company.

As she begins her training with the prestigious Aria Company, will she be up to the challenges that await her on the path to achieve her dream?”