2021 is definitely a hopeful year for Dr. Stone anime fans as it was recently announced that the season of the anime is slated to premiere in January 2021. To add more hype into this announcement, a teaser video was released in the anime’s official website previewing the “Stone Wars” story arc. A new visual was also unveiled. 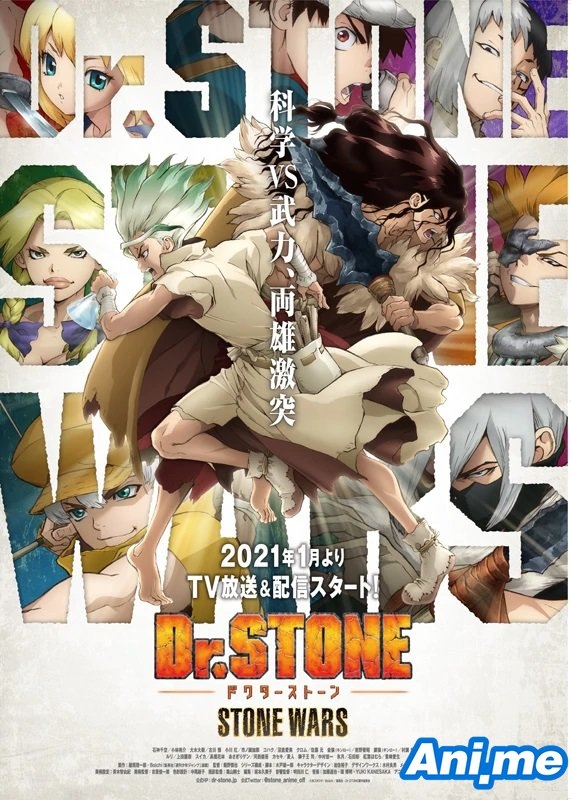 The upcoming new season will be centered on the Stone Wars arc. This big announcement was revealed during the end of the anime’s 24th episode and was previously teased in the second 2020 issue of Weekly Shonen Jump.

In relation to this, an updated promotional video was released by Toho Animation last year during the Dr. Stone Jump Super Stage at Jump Festa ’20. The highlight of the PV shows Senku, Chrome, and Gen joining fists as the swore to fight until the final battle.

You may watch the Promotional Video here.

Dr. Stone is a manga series created by Boichi (Sun-Ken Rock) and Eyeshield 21 author Inagaki. It debuted on March 2017 and is still in the Weekly Shonen Jump. VIZ Media publishes the manga in English and is distributed in both print and digital.

Here is a synopsis of the series as described by VIZ:

One fateful day, all of humanity was petrified by a blinding flash of light. After several millennia, high schooler Taiju awakens and finds himself lost in a world of statues. However, he’s not alone! His science-loving friend Senku’s been up and running for a few months and he’s got a grand plan in mind—to kickstart civilization with the power of science!

Aside from the original ongoing manga series, another Dr. Stone manga is also released by Boichi titled Dr. Stone reboot: Byakuya. It was first released in the Weekly Shonen Jump last October 28 and will have a total of nine chapters.

The popularity of the manga series have paved way into an anime adaptation which was first aired on July 5 in Japan. The series can also be streamed via Crunchyroll (original Japanese language with English subtitles) and Funimation (in Simuldub).

The anime is directed by Sinya Iino at TMS Entertainment. Iino previously worked on storyboards and episode director for Made in Abyss, Revue Starlight, and Hanebad!. Yuichiro Kido is in charge of both scriptwriting and series composition. Their previous work is doing episode scripts for After the Rain, 91 Days, and Blue Exorcist: Kyoto Saga. Yuko Iwasa is in charge of character design. They previously worked with the team who done Yowamushi Pedal and Saint Seiya: The Lost Canvas. Tatsuya Kato, Hiroaki Tsutsumi, and Yuki Kanesaka are in charge of the anime’s music.

In case you are still catching up on the manga series, the first 12 chapters are considered as the “Prologue Saga” which documents the events after Taiju’s awakening. This is until the part of Senku’s confrontation with Tsukasa.

The Stone Formula Arc, unknown forces have caused the whole humanity to become encased in stone which is ending civilization. Two people namely Senku and Taiju Oki were revived from being petrified after 3700 years trapped in stone. In this arc, Senku must find the reason that freed them and this answer might also be the key to revive humanity.

The Vs. Tsukasa Arc begins when Tsukasa reveals his plan to purify the planet Earth by only reviving the pure-hearted youth. Senku, Taiju, and Yuzuriha teamed up on a mission to stop Tsukasa and prevent from getting the miracle fluid.

Now we got fast forward to the Stone Wars saga which starts from Chapter 46 until 82 which centers on the conflict between the Kingdom of Science and Empire of Might, which are respectively established by Senku and Tsukasa.