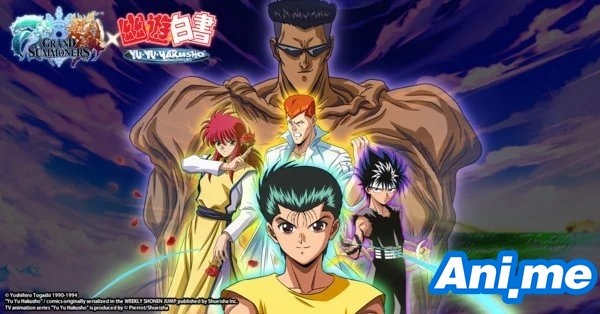 In this current game collaboration, new and old players of GRAND SUMMONERS will be able to get a 5-star Yu Yu Hakusho unit for free. Aside from this, you will be able to summon Yusuke Urameshi, Kazuma Kuwabara, Kurama, Hiei, and Younger Toguro fully voiced by original cast, Yu Yu Hakusho inspired Equipment Summons and story event, stickers, and more rewards.

The game currently has a daily instant win campaign where players can visit the official GRAND SUMMONERS Twitter page and retweet one post per day to win an $100 Amazon Gift Card or 300x Crystals which you can use in the game.

GRAND SUMMONERS’ previous collaboration was from the popular isekai anime The Rising of the Shield Hero, in which follows similar game rewards.

About Grand Summoners (as described by ANN)

Questing in Multiplayer is also a blast, in which 4 players will work together to defeat bosses. The Arena features PvP content in which players face-off using their best units and equips, while players can also compete in Raids for valuable rewards!

But Grand Summoners' single-player content is just as memorable, featuring an epic Main Story mode spanning over 50 hours of gameplay, with new events added on weekly. Players can earn over 1,000 Crystals by completing all single-player missions combined!

One fateful day, Yuusuke Urameshi, a 14-year-old delinquent with a dim future, gets a miraculous chance to turn it all around when he throws himself in front of a moving car to save a young boy. His ultimate sacrifice is so out of character that the authorities of the spirit realm are not yet prepared to let him pass on. Koenma, heir to the throne of the spirit realm, offers Yuusuke an opportunity to regain his life through completion of a series of tasks. With the guidance of the death god Botan, he is to thwart evil presences on Earth as a Spirit Detective.

To help him on his venture, Yuusuke enlists ex-rival Kazuma Kuwabara, and two demons, Hiei and Kurama, who have criminal pasts. Together, they train and battle against enemies who would threaten humanity's very existence.

Source: ANN, which synopsis from MAL