What better way to get people/weebs to wash their hands properly than by getting a popular 2D idol group to promote it? Perhaps that’s exactly the thoughts of Japan’s Ministry of Health, Labour, and Welfare, as they have recently collaborated with Love Live! Sunshine’s in-story idol group, Aqours! The collaboration is for the promotion of proper handwashing during this time of COVID-19.

A new educational poster was recently released this Wednesday featuring three Aqours members: the second-years Chika Takami, Riko Sakurauchi, and You Watanabe. Check out the poster below! 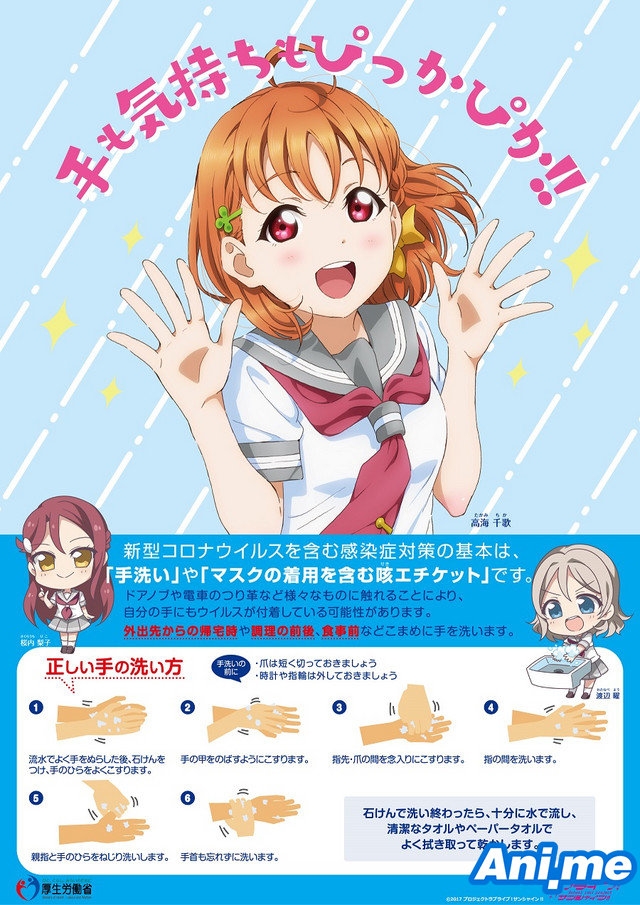 The poster also details instructions on the proper step-by-step hand-washing techniques. A high-resolution version is available in Love Live! Sunshine!!’s official website, as well as in the official webpage of the Ministry of Health, Labour, and Welfare (scroll to about three-fourths of the page to see the image). The Ministry encourages everyone to print out the posters and display them in public to help educate readers, but commercial use and unauthorized modification is not allowed.

Love Live! is a multimedia project co-developed by ASCII Media Works’ Dengeki G’s Magazine, music label Lantis, and animation studio Sunrise. The project has encompassed several media including anime, manga, live concerts, and smartphone games. It was launched in 2010 with nine-piece girl group μ‘s as its faces. The project was adapted into an anime series in 2013, with a second season following in 2014. The project and the group μ’s proved to be a massive commercial success, topping CD sales in Japan and selling out concerts in venues as big as Tokyo Dome.

The next generation, Love Live! Sunshine!!, featured idol group Aqours who, like their predecessors, wanted to save their school from closing. Sunshine!! has released numerous singles and CDs, a two-season anime, as well as a movie, Love Live! Sunshine! School Idol Movie: Over the Rainbow, whose domestic ticket sales crossed the 1 billion yen mark. The movie was also shown in other countries, the United States included.

The newest group in the franchise, the Nijigasaki Academy’s Idol Appreciation Club, were earlier announced to be receiving their own anime series as well.