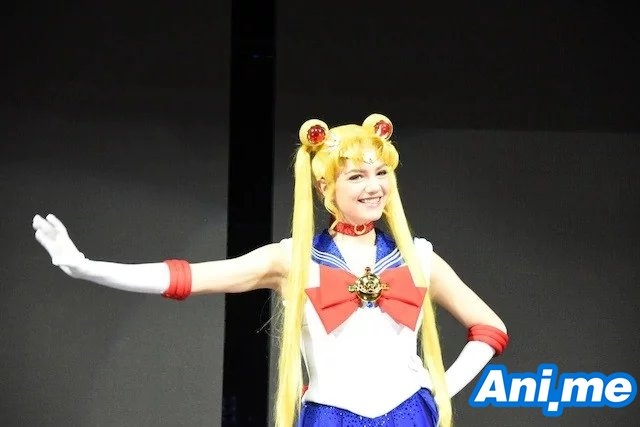 If you remember Evgenia Medvedeva, she is the Russian Olympic skater who dazzled the audience with her skating performance while dressing up as the popular magical girl heroine, Sailor Moon.

Now her childhood dreams of being a Sailor Moon fan is coming true once again as she will star in an upcoming Sailor Moon ice show in Japan!

The upcoming show is called Sailor Moon Prism on Ice which will star Evgenia Medvedeva as Sailor Moon, Satoko Miyahara as Sailor Mercury, Mirai Nagasu as Sailor Mars, Alissa Czinsy as Sailor Jupiter, Becky Bereswill as Sailor Venus and Andrew Poje as Tuxedo. A promotional video of the said event was also released. You can check it out here.

Other cast members for this show include the following:

Script for the ice show is done by Takuya Hiramitsu while music is by Akiko Kosaka and the Gessho Kaigi band.

ANZA (who originally played Usagi/Sailor Moon in the musical productions for five years) will also have a special appearance as Queen Serenity. Kurt Browning, a Canadian figure skater is also confirmed to have a “special guest appearance” as well. Five of the original voice cast of the Pretty Guardian Sailor Moon Crystal anime will be doing respective voice roles for the show.

To those who want to watch the show, it will happen on June 5 to 7 at the KOSE Shin Yokohama Skate Center in Kanagawa.

About Sailor Moon (as Described by VIZ Media)

SAILOR MOON is the quintessential magical girl phenomenon beloved worldwide that chronicles the adventures of a 14-year-old girl and her friends, chosen by destiny to defeat the forces of evil. Told between two beautiful anime series, SAILOR MOON has become cherished by fans for over 20 years.

Usagi Tsukino is a clumsy but kindhearted teenage girl who transforms into the powerful guardian of love and justice, Sailor Moon. Meeting allies along the way who share similar fates, Usagi and her team of planetary Sailor Guardians fight to protect the universe from forces of evil and total annihilation.

Based on Naoko Takeuchi’s mega-hit graphic novel series, Sailor Moon Crystal retells the origins of Sailor Moon, the kindhearted crybaby destined to protect the world from dark forces. When the evil Queen Metalia and her Dark Kingdom threatens Earth, Sailor Moon and her fellow Sailor Guardians must find the only power capable of vanquishing this ancient evil—The Legendary Silver Crystal! But a mysterious man calling himself Tuxedo Mask is also after this sacred treasure. What is his connection to Sailor Moon? And will the Sailor Guardians be able to find the Silver Crystal in time before the world falls into eternal darkness?

In relation to Sailor Moon, an upcoming two-part movie of the franchised titled Pretty Guardian Sailor Moon Eternal The Movie. The first movie is slated to premiere in Japan on September 11, 2020. As of this writing, there is still no word to when the second movie will be released. There is still no announcements yet to when the movie will be released outside of Japan.