A new key visual was released Thursday for the 24th movie in the Detective Conan franchise, Meitantei Conan: Hiiro no Dangan (Detective Conan: The Scarlet Bullet). Check out the newest visual below! 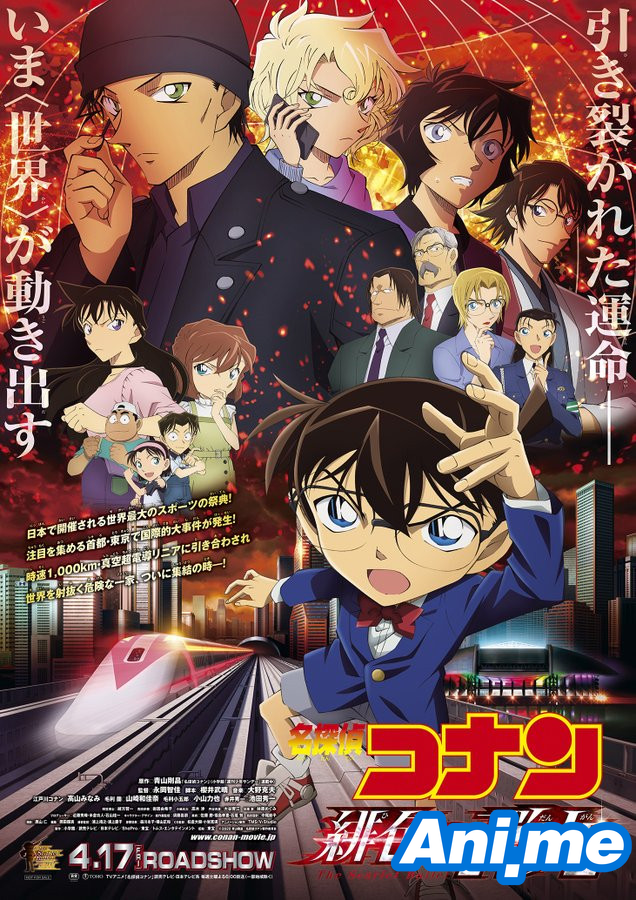 Prominently featured in the new visual are the four members of the mysterious Akai family: FBI agent Shuichi Akai, high school detective Masumi Sera, their mother Mary Sera, and professional shogi player Shukichi Haneda. Other main characters, such as Ran, Ai Haibara, The Detective Boys and of course Conan himself are also featured in the newest main visual.

Check out the trailer here if you haven’t watched it yet!

According to the trailer, the movie is set for an April 17, 2020 release in Japan. There are no news of international screenings yet—but as with other Detective Conan movies, it’s highly possible that this will be released outside of Japan.

Anime News Network describes the film’s story as such:

“In the story, Japan is celebrating the upcoming World Sports Games (WSG), the world’s largest sporting event, in Tokyo. The “Japanese Bullet,” the world’s first vacuum-tube super-conducting linear train, is built with the latest Japanese technology and timed to coincide with the WSG opening ceremonies. The train is set to run from Shin Nagoya Station to Tokyo Station at up to 1,000 kilometers per hour (about 600 miles per hour). However, a bizarre incident occurs during a party held by famous major sponsors, leading to a string of kidnappings of top executives. Conan deduces a possible link to serial abductions in the WSG 15 years earlier in Boston.”

Meitantei Conan: Hiiro no Dangan is directed by Tomoka Nagaoka, who also directed the previous film Fist of the Blue Sapphire. Takeharu Sakai, who wrote the script for the Zero the Enforcer movie, returns to the same role for Hiiro no Dangan.