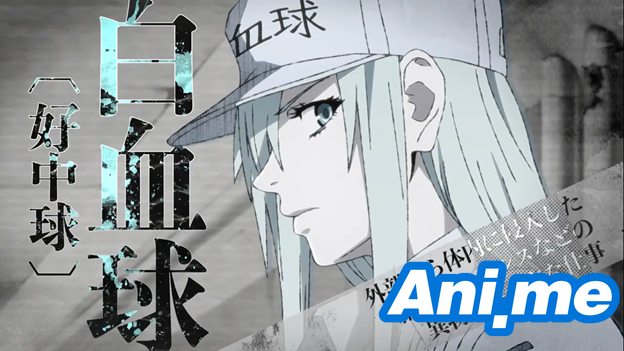 This Thursday the official Youtube channel of Kodansha released a 60-second animated promotional video for Cells at Work! Black, one of the manga spinoffs of Akane Shimizu’s popular science-themed manga series. Check out the video here!

Unlike the first Cells at Work! series which deals with a normal human body, Cells at Work! Black tackles how cells work in a body that is not healthy. Kodansha USA, which holds the license to the manga’s English release, describes it as such:

“The manga and anime Cells at Work! showed you what happens when a young, healthy body gets in trouble … but what if the body wasn’t so young, and was never very healthy? This new take stars a fresh-faced Red Blood Cell and his friend, the buxom White Blood Cell, as they struggle to keep themselves and their world together through alcoholism, smoking, erectile dysfunction, athlete’s foot, gout … it’s literal body horror! Whoever this guy is, he’s lucky his cells can’t go on strike!”

Cells at Work! Black is written by Shigemitsu Harada and illustrated by Issei Hatsuyoshi, under the supervision of the original author Akane Shimizu. It debuted last July 2018 in Kodansha’s Morning magazine, with five tankobon volumes released so far.

Cells at Work!’s first season, which was produced by David Productions, aired from July to September of last year. It was directed by Kenichi Suzuki (JoJo’s Bizarre Adventure, Drifters) with Yuuko Kakihara (Persona 4 the Animation) in charge of series composition. The script was collaborated on by both Suzuki and Kakihara. Its success among fans had led to a stage play adaptation that ran last November, and a mobile game entitled Itsudemo Hataraku Saibou. Last March, David Productions has announced that the anime series will be getting a second season.