The official website and social media accounts of the upcoming anime movie adaptation of boys-love manga Twittering Birds Never Fly (Saezuru Tori wa Habatakanai) has just released a new key visual. The visual features the two leads among the crowd, with bodyguard Chikara lighting a cigarette for his yakuza boss Yashiro. Check it out below. 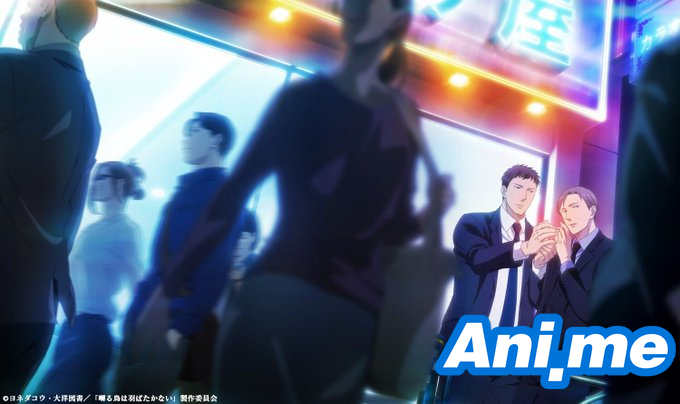 Along with the release of a new visual, the website also revealed that the film is set for a February 15, 2020 release in Japan.

Tarusuke Shingaki (Kariya Matou in Fate/Zero) will be voicing cold-hearted and masochistic yakuza boss Yashiro. Wataru Hatano (Toru Masuko in Ace of Diamond), on the other hand, will be voicing Yashiro’s loyal but distant bodyguard Chikara Doumeki. Both voice actors also voiced the same characters for the audio drama CD released from 2013 to 2018.

The movie will be produced by Fuji TV’s newly-launched boys-love anime label Blue Lynx. Twittering Birds Never Fly will be the label’s first movie project. The label is also set to produce the film adaptations of Given and Umibe no Étranger.

The film will be directed by Kaori Makita (Yuri!!! On Ice, Banana Fish), with scripts written by Hiroshi Seko (Banana Fish, Mob Psycho 100 II). Music composition will be handled by piano trio band H ZETTRIO. The film will be animated by studio GRIZZLY.

Twittering Birds Never Fly is written and illustrated by Kou Yoneda. It has been serialized in the HertZ and ihr HertZ magazines since March 2008. The manga is being officially published in English by Juné, the yaoi manga imprint of Digital Manga Publishing. It describes the manga’s story as such:

“The sexually masochistic yakuza boss, Yashiro, isn’t the type to warm up to others easily. But when Chikara Doumeki, his newly hired bodyguard, catches his interest, he reconsiders his “hands-off” policy with subordinates. As Yashiro’s invitations fail, the yakuza boss finds out his bodyguard has a very personal reason for staying at arm’s length.”