Yuri Manga “Bloom Into You” Now Has One Million Copies in Print!

An amazing achievement worth celebrating for all yuri fans, as Nakatani Nio’s popular Bloom Into You (Yagate Kimi ni Naru) has reached a total of one million copies in print! This was announced this Wednesday by the series’ publisher KADOKAWA. The manga’s eighth and final volume was also released on that day, November 27. 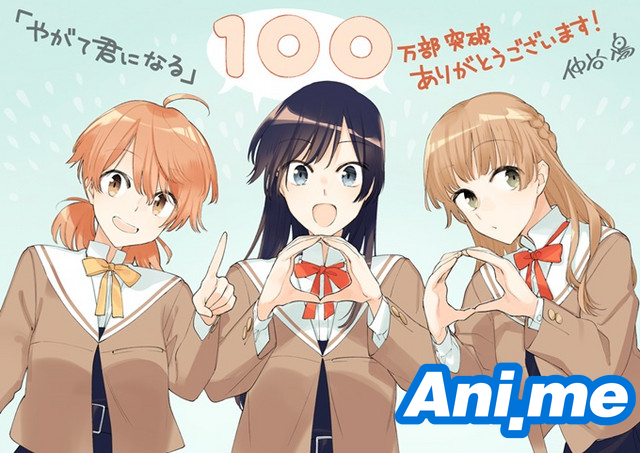 The series’ official Twitter account also posted a special PV for the occasion. Check it out here!

In addition, KADOKAWA also released more details on the “Curtain Call” project for the series, which are:

The Bloom Into You stage play will also be getting an encore performance in fall 2020. The script for the stage play adaptation was written by Suzuki Tomoharu. The first stage play adaptation ran from May 3 to 12 at the Zenrosai Hall/Space zero in Shibuya, with Koizumi Moeka and Kawauchi Misato as leads Nanami Touko and Koito Yuu, respectively.

Bloom Into You is a yuri manga series written and illustrated by Nakatani Nio. It was first published on April 2015 and was serialized in Dengeki Daioh, with publication rights in Japan held by ASCII Media Works. Seven Seas Entertainment licensed its North American release and first published it on February 2016. It was also adapted into a 13-episode anime series produced by animation studio TROYCA.

HIDIVE, which streams the TV anime series with English subtitles, describes the story as such:

“Yuu loves shoujo manga and waits for a love confession to make her feel like a character from her favorite stories but when a classmate admits his feelings, she feels nothing. Time passes and Yuu begins high school feeling lost and confused. Things begin to look up when she witnesses Nanami, the beautiful student council president, effortlessly turn down a boy. Yuu reaches out to Nanami for help and the two quickly become friends. Yuu’s heart is suddenly sent aflutter when the next person to confess their feelings is Nanami! Is Yuu’s own shoujo romance finally beginning?”