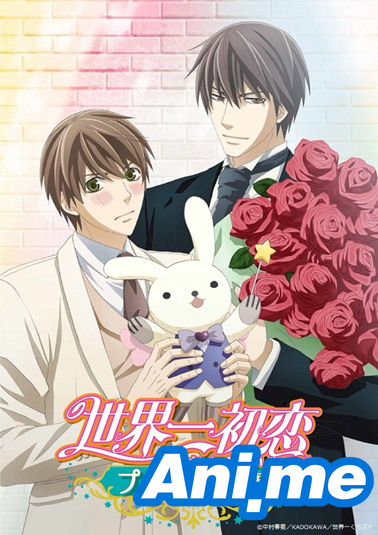 The announcement also revealed that Shuhei Kita is set to return to the series to perform the new anime’s theme song! To refresh your memory, Kita performed “Sekai de Ichiban Koishiteru” (Falling in the Greatest Love in the World) and “Sekai no Hate ni Kimi ga Itemo” (Even If You Go to the Ends of the Earth), the OP songs for both seasons of Sekaiichi Hatsukoi. The new song with an as-yet unannounced title will ship on February 19, along with a separate character vocal album that includes the old theme songs.

The new anime project was previously revealed to be part of celebrations for the fifth anniversary of Kadokawa’s Emerald magazine, where the manga is currently being serialized. Emerald is a boys’ love magazine launched in 2014, and it was based on the in-story magazine featured in the manga—if you will remember, main couple Ritsu and Masamune work in a magazine of the same name.

Sekaiichi Hatsukoi is a boys’ love manga written and illustrated by Shungiku Nakamura. It was first published in 2006 in Kadokawa’s The Ruby magazine and then moved to Asuka Ciel in 2009. In 2014, the manga eventually settled in Emerald magazine, debuting in the magazine’s maiden issue.

In 2011, the manga was adapted into a 24-episode anime series by Studio Deen and under the direction of Chiaki Kon. The first season aired from April to June of that year, with the second season airing from October to December of that same year as well. Kon also directed the anime adaptation of another popular boys’ love manga, Junjou Romantica, which was also the work of Sekaiichi Hatsukoi’s author.

The story revolves around Ritsu Onodera, a literary editor who resigned from his father’s publishing company because of his coworkers’ jealousy. He gets accepted at Marukawa Publishing but is assigned to the company’s infamous shoujo manga department, where he meets Masamune Takano. Strict, intolerable, and almost tyrannical, Takano initially nearly drives Ritsu into resigning but inadvertently pushes him to stay after calling him “useless”. Ritsu’s pride is hurt so he decides to stay and prove himself to his demanding boss. Later on, he finds out that Takano was his older schoolmate from high school who he had a brief relationship with. It turns out that Takano still has feelings for Ritsu and he vows that he will make Ritsu fall in love with him again.