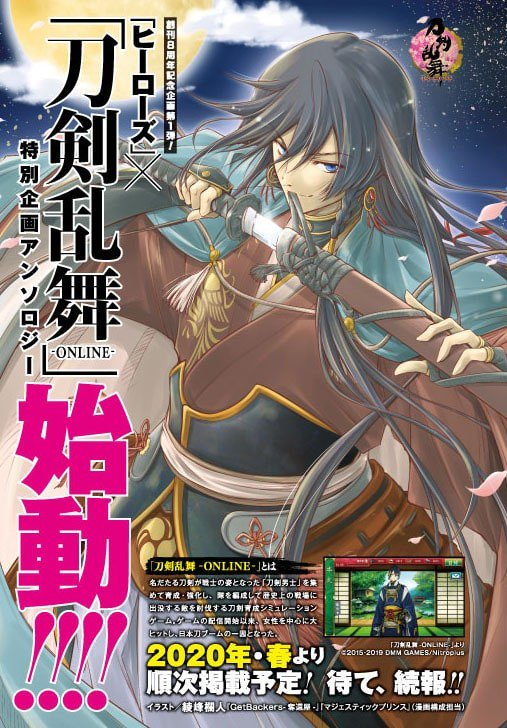 The ‘sword boy’ fever continues as the December issue of Monthly Hero magazine announced that the popular online browser and mobile game Touken Ranbu will have another manga anthology which is slated to be released in spring 2020. This anthology project is a way to commemorate the magazine’s eight anniversary.

The announcement comes with a beautiful illustration of Izuminokami Kanesada created by Majestic Prince and Get Backers illustrator Rando Ayamine.

The second project that has been confirmed is an upcoming collaboration with a pachislot and pachinko maker Universal Entertainment. As of this time, no further information has been released.

Touken Ranbu is a browser game created by DMM Games in which the player obtains swords in the form of handsome swords. A majority of the first generation of swords are named and inspired by real historical Japanese swords. The popularity of the franchise has paved way for an anime adaptation Touken Ranbu: Hanamaru, manga adaptations, and a couple of stage play adaptations.

The first anime adaptation Touken Ranbu Hanamaru first premiered in October 2016 for a total of 12 episodes. The second season was aired on in Japan on January 8, 2018 on BS 11 and Tokyo MX. DMM also began streaming the anime on its website on the same day. This season still followed the same format as the first where the episodes are named after months of the year.

About Touken Ranbu Hanamaru (as described by Crunchyroll)

In the year 2205, the past becomes threatened by the historical revisionists who seek to change it. Protecting history becomes the task of a boisterous band of swords that are brought to life, including the glamorous Kashu Kiyomitsu and the kindly Yamatonokami Yasusada. Beyond their battles, these legendary swords from different eras lead charming daily lives.

With that said, I guess we’ll be expecting more from the Touken Ranbu franchise next year!