Cells at Work! Gets New Spinoff Manga Set Inside a Baby’s Body 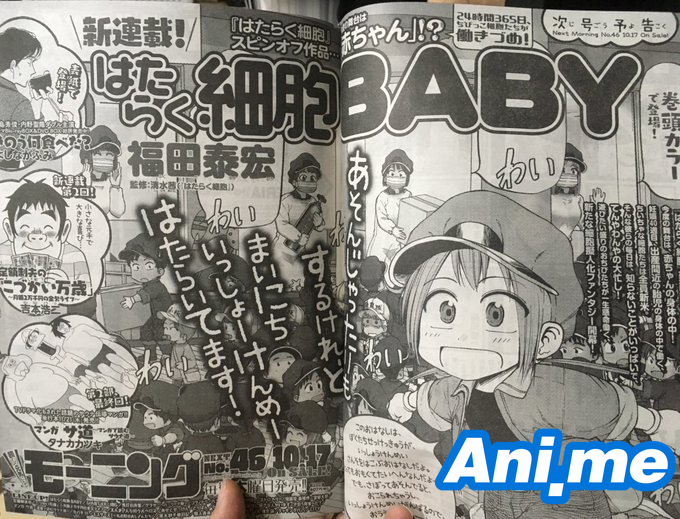 Science is more fun when mixed in with anime, like the 2018 TV anime Cells at Work! Now, get ready for more science fun, as we’ll be seeing our favorite cells in a new setting. Kodansha’s Morning magazine announced this Thursday that the science-centered manga will be getting a new spinoff manga entitled Hataraku Saibou! Baby (Cells at Work! Baby). And yes, the title says it all: the spinoff manga will now be set in the body of a human baby.

According to the announcement, the spinoff will center on cells living inside a baby 40 weeks since conception and nearing delivery. Naturally, the cells inside the baby’s body are all new and thus, know nothing—yet.

Cells at Work! Baby will debut in Morning magazine on October 17 with a color opening page. The manga will be illustrated by Yasuhiro Fukuda.

Cells at Work!’s first season, which was produced by David Productions, aired from July to September of last year. It was directed by Kenichi Suzuki (JoJo’s Bizarre Adventure, Drifters) with Yuuko Kakihara (Persona 4 the Animation) in charge of series composition. The script was collaborated on by both Suzuki and Kakihara. Its success among fans had led to a stage play adaptation that ran last November, and a mobile game entitled Itsudemo Hataraku Saibou. Last March, David Productions has announced that the anime series will be getting a second season.