“Congratulations on Lyrical Nanoha’s 15th anniversary. I feel nostalgic about the day when we had a press conference for the first Nanoha at King Records’ studio. I remember I was excited with so much anticipation at the time. I never thought it would become a series that has continued even until now, 2019. I have experienced many things through the franchise, and have had a lot of fun at each time. 15 years has passed, it still makes me very excited. I am very thankful to be involved in such a wonderful franchise. If there is still something I can do, I would be happy to offer my little help. Happy 15th anniversary!”

“It has been 15 years since the day when producer Mishima-san, Yukari-san, and I made the presentation at King Records’ multi-purpose room by arranging long desks and pipe chairs. After reading Tsuzuki-san’s scenario, I was strongly inspired by the character’s pure soul and its thrilling story, felt like ‘This is the series that I definitely want to deliver to many people!!’ Then the entire production team worked so hard. That feeling spread out little by little as the episodes and the series continued. I feel once again that I can’t be happier than being beside with Nanoha for such a long time along with all of you. In order to express my gratitude to Nanoha that gave so many ‘beginnings’ and to those who dedicated all of their love to Nanoha, I will do my best with my biggest love at the ‘Lyrical Live’ in January next year!! Thank you so much for 15 years!! And thank you for your continued support!!” 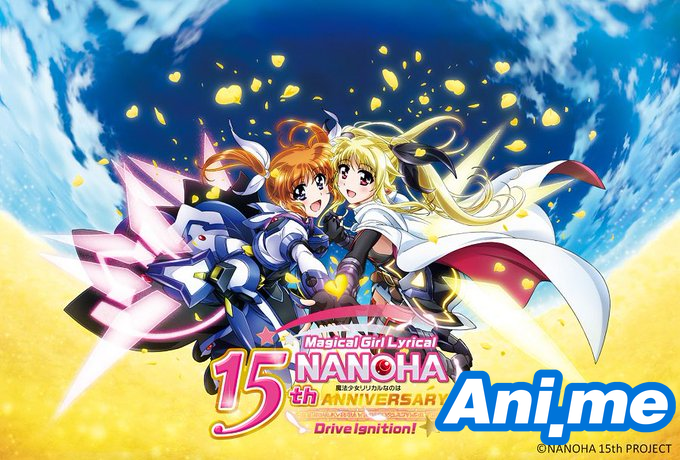 Magical Girl Lyrical Nanoha was directed by Akiyuki Shinbo (Puella Magi Madoka Magica) and script written by Masaki Tsuzuki. It follows the story of Nanoha Takamachi, who stumbles upon the shape-shifting mage Yuno Scrya and helps him collect the Jewel Seeds. Eventually she encounters Fate Testarossa, another magical girl, whom she battles for the Jewel Seeds.