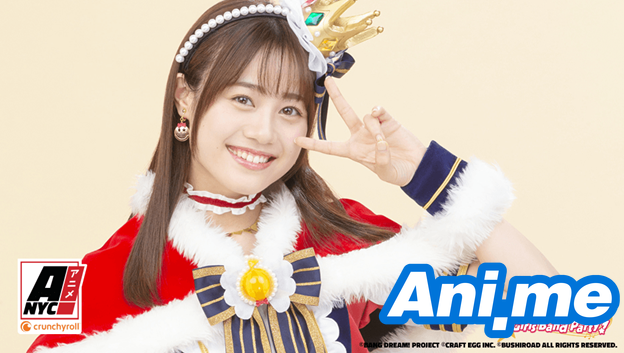 Miku Ito has voiced several well-known anime characters, most prominently Kokoro Tsurumaki from the band Hello, Happy World! of the BanG Dream! franchise. Her other notable roles include Miku Nakano in the Quintessential Quintuplets, Yuriko Nanao in THE IDOLM@STER MOVIE: Kagayaki no Mukogawa e!, Nanako Usami in Locodol, and Yomogi Tanaka in How Clumsy You Are, Miss Ueno. She will be voicing Maple in the upcoming Nekopara anime as well as lead character Misuzu Moritani in the upcoming OVA adaptation of yuri manga Fragtime.

According to the Anime NYC website, Ito will be holding a special BanG Dream! concert as her character Kokoro Tsurumaki on November 16. She will also appear in a special panel and a meet and greet session with fans who want to see her up close. During this meet and greet, fans will also get the chance to personally greet her individually and hand gifts to her. Please note however that she will not be handing out autographs during the event.

Besides Ito, Anime NYC will also be hosting Dr. Stone manga creators Riichirou Inagaki and Boichi, Monogatari series illustrator VOFAN, along with guest performers JAM Project, Love Live! Sunshine!!’s Aqours sub-unit Guilty Kiss, TRUE, and ZAQ. The convention will also be hosting legendary Gundam creator Yoshiyuki Tomino. Tomino’s guesting at the Anime NYC is part of the celebrations for the franchise’s 40th anniversary. This will be Tomino’s first and only US appearance.