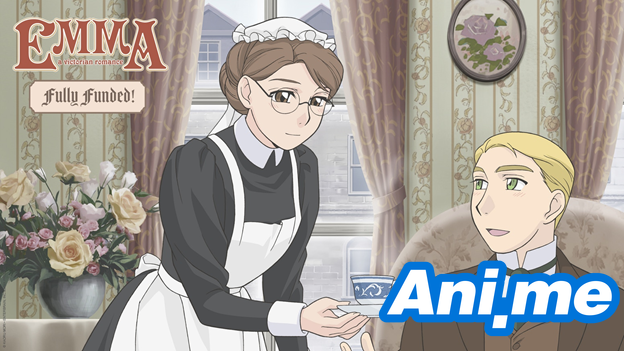 Other previously-announced dub cast members are:

Right Stuf ran a Kickstarter campaign form September to October last year which aimed to create an English-dub Blu-ray release of the anime’s first season. The campaign was successful and even managed to reach its stretch goals of dubbing the second season as well.

The dub will be directed by Joe Digiorgi at Headline Studios. To ensure the authenticity of the English dialects and the characters’ British accents, Right Stuf also hired the services of Rhiannon Ross as well as dialect coaches Jim and Carolyn Johnson.

This release will be the first time that Emma will receive the Blu-ray treatment, as it only had a DVD release in Japan in 2008.

Emma’s story is described in Nozomi Entertainment’s Kickstarter page as such:

In 19th-century London, class lines are sharply drawn, and the social standing to which people are born dictates the path their lives will follow. Emma, an honest and hardworking young maid, never felt her place in life to be a burden. But then she met William, a member of the gentry and the eldest son of a wealthy family. His warm smile and earnest affection threaten to capture her heart… but can love truly conquer all?”

Emma: A Victorian Romance is a manga series written by Kaoru Mori and was serialized from 2002 to 2006 in Comic Beam magazine. Mori, a self-professed Anglophile, went to great lengths to faithfuly recreate and capture 1895 London in her manga in meticulous detail. In 2005, the manga was adapted into an anime series by Studio Pierrot and ran for two seasons. The anime series was directed by Tsuneo Kobayashi (The Twelve Kingdoms), with scripts written by Mamiko Ikeda (Fruits Basket) and music by Kunihiko Ryo (Yona of the Dawn).