It’s a big day today for fans of One Piece in Japan, as today, August 9, is the theatrical release of the newest film in the franchise, One Piece Stampede. On August 8, Thursday, the official Twitter account of the long-running manga series posted a message from creator Eiichiro Oda. In it, he relays his excitement for the newest film in three languages: Japanese, English, and French!

Check out his message in English below: 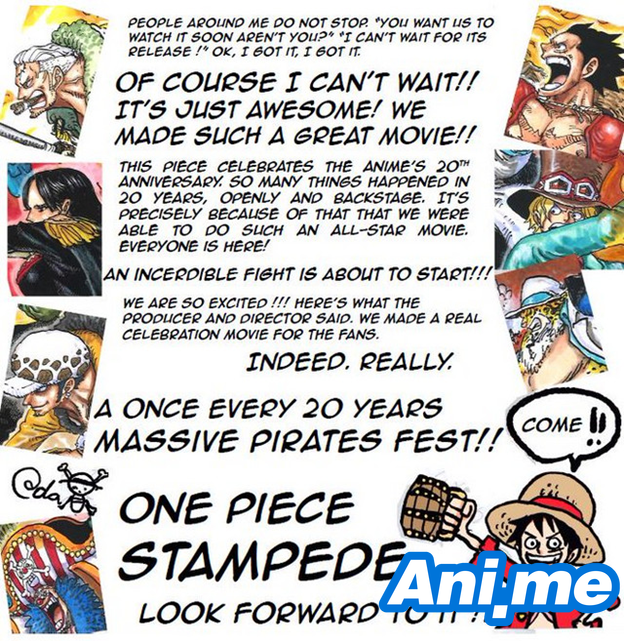 Most of the main cast was announced to be returning for the film, such as the voice actors for Monkey D. Luffy (Mayumi Tanaka), Roronoa Zoro (Kazuya Nakai), Nami (Akemi Okamura), Usopp (Kappei Yamaguchi), Vinsmoke Sanji (Hiroaki Hirata), and Tony Tony Chopper (Ikue Ohtani). New cast members for the film are:

” The world’s greatest exposition of the pirates, by the pirates, for the pirates – the Pirates Festival. Luffy and the rest of the Straw Hat Crew receive an invitation from its host Buena Festa who is known as the Master of Festivities. They arrive to find a venue packed with glamorous pavilions and many pirates including the ones from the Worst Generation. The place is electric.”

One Piece was first released in Shueisha’s Weekly Shonen Jump magazine in July 22, 1997. Written by Eiichiro Oda, One Piece follows the adventures of Monkey D. Luffy who gained the ability of stretching his body like rubber after accidentally eating a Devil Fruit. Together with his band of pirates named the Straw Hat Pirates, he explores the Grand Line in search of the “One Piece”, hailed as the greatest treasure in the world and the key to become the next Pirate King. Since its publication, Oda’s magnum opus has enjoyed critical and commercial success in Japan and abroad, even setting a Guinness World Record in 2015 for “most copies published for the same comic book series by a single author”. In 1999, Toei Animation has adapted his work into a TV anime and has been running ever since, enjoying great popularity as well.