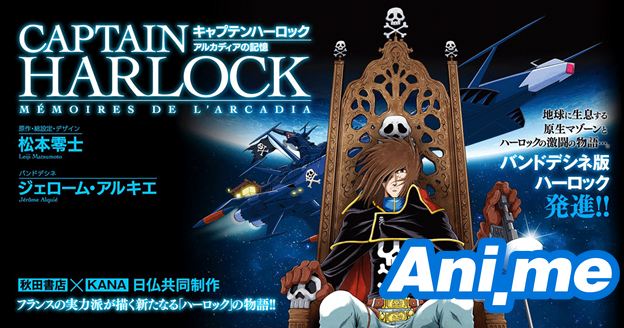 Classic science fiction series Space Pirate Captain Harlock is set to make a return! Akita Shoten has just released a new manga series based on Leiji Matsumoto’s classic sci-fi story. Entitled Captain Harlock – Arcadia no Kioku/Memoires de L’Arcadia (Memories of Arcadia), the first chapter was released in the Manga Cross website this Tuesday. Jérôme Alquié, a French artist, is credited for the manga’s art while Matsumoto is credited for the original story, characters and setting. Alquié’s involvement in the project is a result of the partnership between Akita Shoten and French publisher Kana.

Memoires de L’Arcadia revolves around the efforts of Captain Harlock and his crew aboard the invincible spaceship Arcadia in stopping the plans of Mazon leader Queen Rafflesia in making the planet Earth hers. Complicating matters are the long-dormant Mazons, who have been on Earth before the dawn of humans, suddenly awakening to join Queen Rafflesia’s cause.

Space Pirate Captain Harlock is a manga series written by Leiji Matsumoto. It was first published in 1977 and was serialized in the Play Comic magazine until its finale in 1979, with Akita Shoten releasing five tankobon volumes. Matsumoto’s story has been adapted into several TV series and films, most recent of which is the 2013 3D CG film directed by Shinji Aramaki. Across all these adaptations, the basics of the story remain the same: it is the year 2977 AD, where humans already have the capacity to travel in space and explore the stars. Humanity, however, has long suffered defeats from alien invaders, plunging the populace into hopelessness and despair. Captain Harlock, however, refuses to succumb to this hopelessness and leads a crew of space pirates in conducting raids against Earth’s alien invaders.