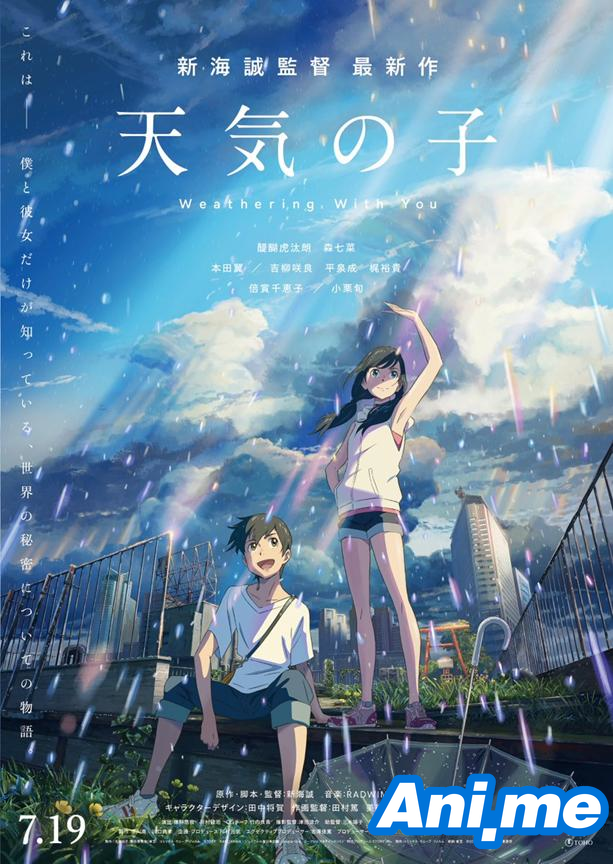 Your Name director Makoto Shinkai’s newest film, Weathering with You (Tenki no Ko) has just released a new trailer. The 2-minute trailer, which exhibits Shinkai’s characteristic animation style, offers us more insight on the upcoming film, as well as previews of the other characters. Check it out below!

There are no English subs, but worry not because we will give you a detailed breakdown of the trailer. :)

The film’s female protagonist Hina Amano (VA. Nana Mori) opens the trailer with the words: On that summer day, we were on the blue clouds, and we changed the world.” The trailer then cuts into a preview of one of the film’s theme songs, Grand Escape, which was sung by actress Touko Miura. Miura was chosen in an audition held by RADWIMPS to pick a female singer “more like the sound of the world itself”. She spent two months recording the song, under the supervision of the band’s leader Yojiro Noda himself.

The trailer then starts to give us previews of the characters, starting with the male protagonist Hodaka Morishima (VA. Kotaro Daigo) who says, “I don’t want to go home”. Hina is then shown apparently talking to Hodaka and asks him, “You don’t have a home, right?” Is this the two characters’ first meeting?

Two other characters are introduced, but sadly yours truly cannot read kanji. We can tell you though what they said: the male character, who appears to be talking to Hodaka, says, “Are you looking for a job, boy?” The next scene shows a female character who says, “The blue sky and the ocean are deep in our world’s path, someone said.” The next scene has Hodaka exclaiming, “You’re a 100% weather woman!”

We then hear the characters each saying “rain”, with Hina ultimately cutting in and showing us her mysterious power: “[Rain] Right now go away!” Sure enough, the sky clears, sunlight shines once more, and with Hodaka awed by her side she muses, “I didn’t know that there were a lot of people who wanted to see this blue sky.”

Hodaka then narrates: “Weather sure is mysterious… Just because the sky is out, a lot of feelings changed. A hand (presumably his) holds a ring, and he says, “My heart moved with Hina-san.”
The mood changes, however, in the next scene as a mysterious man says, “You’re an adult now, boy.” A gun then goes off.

We then hear Hodaka shouting, “I just wanted to see that person one more time!” The trailer then cuts into the movie’s second theme song, ”Ai ni Dekiru koto wa Mada Arukai (Love Can Still Do Something)” sung by RADWIMPS.

Hodaka then ends the trailer with the words, “This is something only me and her knows: about the world’s secret story.”

Weathering With You (Tenki no Ko) is set for a July 19 release in Japan. International screenings have also been announced for the film, with GKIDS planning to release it commercially in the US in 2020.