The Disappearance of Haruhi Film Gains License from Funimation 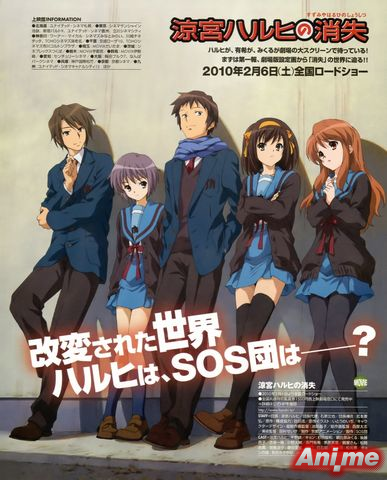 In 2006 a unique anime known as “The Melancholy of Haruhi Suzumiya” was released. Told from the perspective of a cynical young man known as Kyon the story tells of how he is dragged along by his supernatural seeking classmate Harui Suzumiya to join her club the “SOS Brigade” (“Spreading Excitement all Over the World with Haruhi Suzumiya Brigade”) made for the investigation of mysterious events. Along with they are joined by shy Mikuru Asahina, bibliophile Yuki Nagato and friendly transfer student Itsuki Koizumi.

But Kyon soon learns that not all is at he seems as he discovers that Haruhi actually has supernatural powers herself, unwittingly able to warp reality with her thoughts and emotions. What’s more his fellow club mates are not what they seem either. Rather each one are beings from different realities and timelines and were sent to observe Haruhi, entertaining her supernatural fancy while trying to maintain reality in the face of her abilities.

The anime itself is a unique not only because of its plot and characters but the arrangement of its episodes and story as well. Unlike other anime “The Melancholy of Haruhi Suzumiya” takes a nonlinear approach to its fourteen-episode story and still creates a well done development for the characters. Currently the anime has finished two seasons with a total of 28 episodes and it has been over seven years since we last heard from the series.

Now an announcement has been made that on the first half of 2017 Kyoto Animation’s “The Disappearance of Haruhi Suzumiya” anime film will be released on Blu-ray and DVD via the licensing of North American anime distributor “Funimation” on Monday.

Based on the fourth volume of the light novel series by Nagaru Tanigawa and Noizi Ito and tells the story of the SOS Brigade in mid-December when Haruhi announces that they were to have a Christmas party. But days after they begin preparing for the party strange things have occurred, first Haruhi has gone missing along with Koizumi, Mikuru has lost recognition of Kyon, Yuki has become the sole member of the literature club and Kyon stands in the middle of all this seeming to be the only one unchanged.

For more information check out Animenewsnetwork