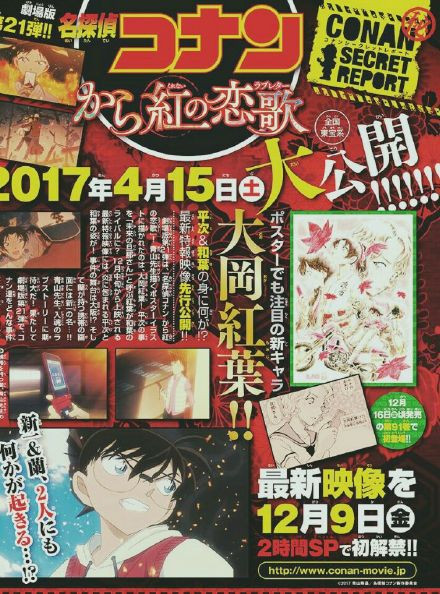 Written and illustrated by Gosho Aoyama, serialized by Shogakukan’s Weekly Shōnen in 1994, and premiering on January 8, 1996, “Detective Conan” a.k.a “Case Closed” is by far the longest running shounen anime to be known to date with over 800 episodes and 20 films and only continues to grow with audiences old and new still watching and enjoying the work.

For those who are unfamiliar with this anime the story is as goes, seventeen-year-old mystery expert Shinichi Kudou recognized for his ability in solving several challenging cases one day sees two suspicious men and decides to follow them. Upon doing so he becomes a witness to their disturbing illegal activity. Though attempting escape Shinichi is captured in the end and is dosed with an experimental drug created by the men’s criminal organization and is left to die.

Instead of dying however Shinichi is changed into a seven-year-old with his intelligence and memories intact. Now with his new body Shinichi takes the alias Conan Edogawa and aims to find the people who drugged him, all the while continuing to solve mysterious through his childhood friend Ran Mouri’s father, private detective Kogorou Mouri and maintaining his real identity for his loved one’s protection.

With its unique plot, engaging mysteries and creative characters “Detective Conan” is a type of anime that is rarely seen in today’s anime line up. While the art style has shifted with the times the essence of the show remains the same. Some may think that the anime itself would be rather long winded

Now as the anime continues to grow an announcement has been made on further details a 21st movie a.k.a “Movie 21” of the series in production thanks to a spread by “Weekly Shonen Sunday”. Set to premier on April 15, 2017 the film to be known as “Meitantei Conan Kara Kurenai no Love Letter” or “Detective Conan: The Crimson Love Letter” is said in Osaka.

For more information you may visit either of these sites: