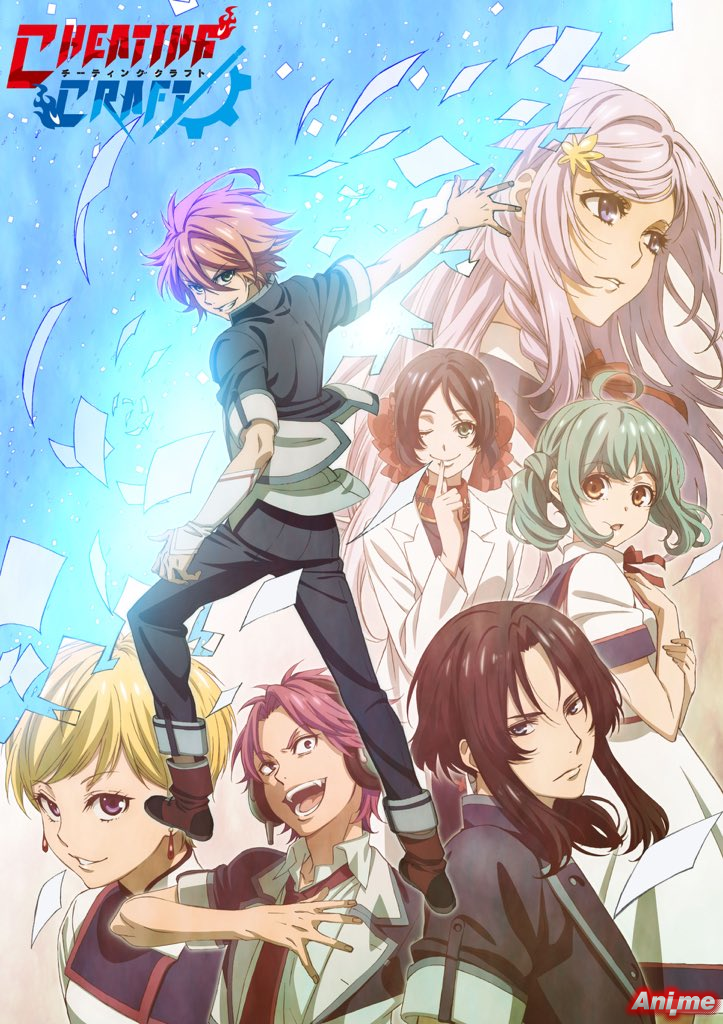 This season is like the other previous seasons, has it share of awesome and also some weird ones. From boobs smashing and butt crushing battlefield of Keijo to an unlikely fat ass hero of To Be Hero, another anime with an unlikely theme is currently airing, a show about academic cheating, Cheating Craft!

This Chinese-Japanese collaborated anime produced by HaoLiners.The story is about a society where the ones who is successful academically will become the successful ones on the society, while the ones who failed will be deemed as failures of the future. Because of this, the Learning Type (L-Type) has the obvious advantage to climb up on the society. Yet, there is a group of students who don’t want to be pinned on a seemingly inevitable fate because they are intellectually inferior, they resort in cheating, hence, they became the Cheating Type (C-Type). In the end, there are L and C-Types forming a team with each other to conquer the school grounds. Though, the way they are cheating is quite impossible in real life and are quite advance, the proctors didn’t fall back and also made the classroom itself a battleground. Some of the teachers even interfere, instead of just keeping an eye on cheaters, on the students answering the exams, with both the L and C-Types suffering. The story revolves around Mumei, a C-Type, and Kou, an L-Type, working together with the aim of absolving Mumei’s father who was wrongly accused.

The concept of this anime is quite appealing because we all know deep inside ourselves that once in our lifetime as students that we did cheat on an exam. And as technology advances and the rapid spread of information like a wildfire, it seems that cheating in school became more “acceptable”. Even though cheating is nothing to be proud of, even I cheat on exams when I was on college, do you even wonder why do we cheat? What drives us to cheat even we know that the very act is wrong?

There is one word that drives us all to cheat, “expectation”. The last generation before us didn’t experience the technology we are currently enjoying. And they are more focused on their studies. Hence, one’s failure is one’s own fault. It is not bad that we abide with the expectations our parents and guardians pushing on us, but these may push us to our limits. Not everybody is a fast learner. And the agony of being branded as someone incompetent is degrading itself. I know it is difficult for a facilitator of learning to divide yourself and teach “every single student” in accord to the pace of their learning, but teachers can come up with other measures that may yield the almost same resort. That’s where creativity enters. How to make the students interested on the subject matter? If you make it interesting and intriguing enough, that will make the students likely to learn more and the teaching more effective. We anime enthusiast already watched like tons of anime, played several games, and read bulks of manga and we still emembers the story of every single one of them. Why? Because we are interested, as simple as that. And for the students, discipline, cheating is not the key to success. We have several distractions that impede our studies. I am not saying to become a shut in and study all day long. That life is dull, I tell you, I am once like that during my elementary and high school days. It is like we just have to put everything in moderation, balance studies, and fun. But never forget, what is the most important in school is to have fun while learning. This makes everything, from quizzes to major exams, quite easier and you will think less of them as burdens.