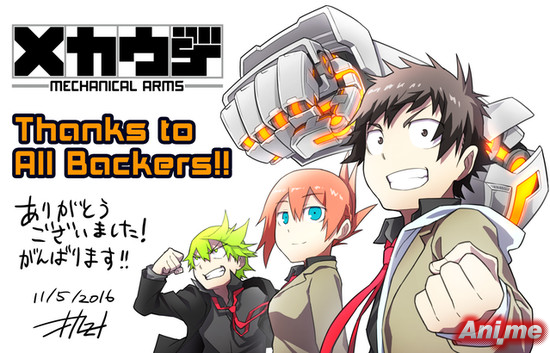 Sushi Police Animator Sae Okamoto opened up a Kickstater campaign last month for her anime project Mecha-Ude. It reached its starting project goal of $25,000USD which was then extended to $40,000USD and $60,000USD stretch goals. The campaign ended with a huge success earning a total of $67,918USD.

The purpose for the campaign was to build a better team for its 25-minute pilot episode. Sae Okamoto, along with a “small group of production team members” are now currently working on the project and planned to finish the anime by the end of this year.

Here is a description about the anime project as well as its PV:

Hero was a high schooler living an ordinary life.
One day, he meets a very strong and intelligent mechanical arm named “Mecha-ude”. After a strange turn of events, the “Mecha-ude” started living inside Hero’s hoodie and the two’s life full of trouble begins.

As the boy and his “Mecha-ude” fights together and strengthen their bonds, the two also meets new friends who also fights along with each of their own unique “Mecha-ude” partners.

Out of those, one of the heroine has two “Mecha-ude” which appears out of her skirt. An active girl with a totally opposite characteristics from hero himself, he gradually becomes attracted to her.

But the two are confronted with other “Mecha-ude” users who are in search of the secret of “Mecha-ude” relentlessly.

In this work, an anima-machine named “Mecha-ude” with self-awareness appears. Even though they look inorganic in nature, they all show or express their own feelings and opinions. They can feel angry, sad, and even encouraged to fight against enemies.