Crunchyroll publicized their list of anime series for Winter 2017, even though they just started with their Fall 2016 series.

1. Yowamushi Pedal: New Generation
This is the third season for the Yowamushi Pedal series. Because of his love for anime and his ultimate goal of renewing the anime club, otaku Sakamichi Onoda enters the world of high school bicycle racing so he can recruit Shunsuke Imaizumi. Thus, Onoda’s bicycle racing adventures begin!

2. Hand Shakers
In Osaka, Tazuna is a high school student and a mechanics expert. He meets Koyori when he was requested for a certain repair in a university research facility. As Koyori was sleeping, he touches her hand and he hears a voice that will lead him to a new world called Ziggurat. From here, Tazuna discovers the existence of Handshakers: people who join hands and use weapons from their own psyche called Nimrod. The ultimate goal of the Handshakers is to fight against each other so that they can reach and defeat the “god.”

3. ACCA: 13th Ward Observation Department
The story centers on the kingdom of Dowa which is composed of thirteen states. All of the agencies in the 13th states are under the organization known as ACCA. The giant organization includes the cunning Jean Otis, the second-in-command of the inspection agency.

4. Little Witch Academia
Akko Kagari is an impressionable girl who enters the famous Luna Nova Academy because of her idol Shiny Chariot. However, the witchcraft classes she takes bore her. One day, their class required them to enter a labyrinth under the Tower Luna Nova, and one of her classmates awakened a sealed dragon. What could Akko do to prove her abilities?

5. Marginal#4: Kiss kara Tsukuru Big Bang
This is a series based on Rejet and Idea Factory’s Marginal #4 franchise. Synopsis to follow!

6. Granblue Fantasy: The Animation
Granblue Fantasy is originally a smartphone game by Cygames, and was given a manga adaptation last April by illustrator Kendi Oiwa and writer Makoto Fugetsu. A young boy named Gran lives with his winged dragon Bii in the island of Zank Tinzel. They suddenly meet Lulia who was escaping the wrath of the Eleste Empire, a massive military nation that is aiming to rule the heavens. They all escape through the sky, with Grans’ father’s words locked in their hearts, “Wait for me on the island of stars, Istalusia.”

7. Scum’s Wish
Mugi Awaya and Hanabi Yasuraoka look like they are the most perfect 17-year old couple, but other people don’t know that they aren’t really in love with each other. Mugi is in love with his ex-home tutor, while Hanabi is in love with a teacher who was a family friend since she was a kid. Mugi and Hanabi only became a couple so that they could wallow in the sadness of unrequited love. But will they stay in this dire state forever?

8. Demi-chan wa Kataritai/ Interviews with Monster Girls
Society has become more open-minded regarding the existence of ajins or demis, thus they can freely roam the earth alongside humans without the fear of discrimination. A curious high school biology teacher gets interested with demis and how they interact with the humans.

9. Rewrite 2nd Season
Kotarou Tennouji has the amazing ability to rewrite any of his body parts. Because of this ability, he is very curious about the supernatural. Because of this, the Occult Research Club’s president Akane Senri recruits Kotarou; Chihaya, the transfer student; Lucia, the class representative, and the meek Shizuru. Each of the members reveals their supernatural adventures that will eventually lead Kotarou to a tragic fate that only he could rewrite.

10. Chou Shonen Tanteidan NEO
The story focuses on the grandson of Kobayashi, a character in Edogawa Ranpo’s Detective Boys series.

11. Gabriel DropOut
What would happen if an angel came to Earth and lived like a human? Chief Angel descends from heaven and gets so used to living like a normal human being that she starts to skip school and gets addicted to online gaming. The story of Gabriel in the human world is a school comedy about how a lazy angel leads herself to self-destruction. 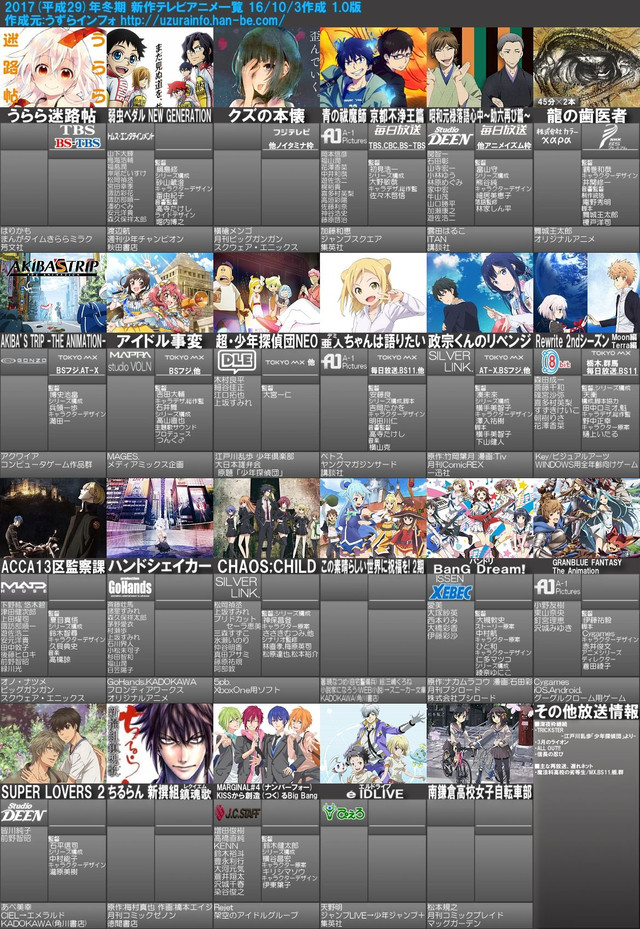