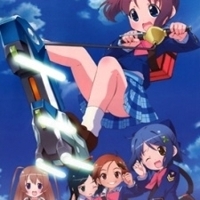 The story begins when the main character, Manami Amamiya, transfers to Seioh High School. Manami is an active girl with a positive personality, often shouting her personal motto Massugu Go! (meaning “Go straight ahead!”). Despite it being the day before her first day, Manami decides to go to Seioh to witness the forty-fifth swim meet where four members from six classes participate in a relay race against each other. On the way to school, Manami, or Manabi as she wants to be called, meets Mika Inamori, a shy student of Seioh who was to participate in the swim meet, despite her not knowing how to swim. After an intense ride together on Manami’s futuristic scooter, they end up literally crashing the meet over the fence and into the pool. Due to Mika’s inability to swim, Manami stands in for her, though she is not very helpful. The next day during a meeting led by the student council in front of the entire school, Mika, the lone student council member and secretary, tries to rally students to join the council, but is initially met with an apathetic audience. Suddenly, Manami bursts through the doors of the auditorium on her scooter only to be summarily punished for the disruption. Manami shows interest in becoming the student council president, but since she is a new student and has already caused trouble for the school twice, the principal is reluctant to allow Manami to become the president. To show the school how much she wants to lead the student body, Manami begins to sing the school song of Seioh after hearing it for the first time the day before. At the conclusion of the song, Manami is inducted as the student council president and received well by the entire school.

The story that follows pertains to Manami working with Mika, and three other classmates named Mutsuki Uehara, Mei Etoh, and Momoha Odori, in student council matters, despite Manami and Mika initially being the only official members. After some remodeling of the student council room, Manami and her friends set forth to plan for the upcoming student festival.(Source: MAL)

Anime Rating
7.6/10
128 users rated this.
Similar in these categories.