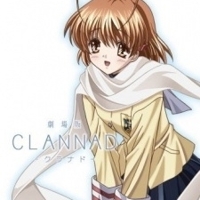 Clannad is set in a high-school located in a town in Japan, which one isn’t really specified. Okazaki Tomoya is a third-year student who doesn’t take his studies seriously. Always late for class, he’s seen as a delinquent by most of the rest of his classmates who are busy preparing for their entrance examinations to get into college. Unfortunately also he does not have too many close friends either.

Tomoya seems not to mind too – until one day he meets a girl, Furukawa Nagisa, who is left alone without friends on this school, because everybody she knew already graduated. What a clumsy girl, he thinks at first. But he can’t leave her alone and so, while helping her, he meets a few other girls from his school. Although he doesn’t care much about them at first, he soon opens his heart to them as they get to know each other better.