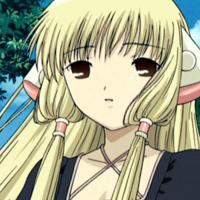 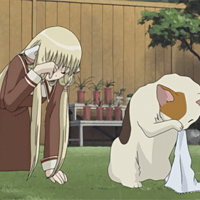 In an alternate version of the present day, we have computers known as Persocoms that can be designed to look like toy figures, animals, and even people. Our story focuses on one such Persocom named Chi and her new owner, Hideki Motosuwa, who is too broke to buy one and yet is lucky enough to have found Chi in the trash. But when Hideki turns Chi on for the first time, something strange occurs. Without her OS, Chi should not be able to be as cognizant as she acts. Hideki has a mystery to unfold and still pass his classes at the same time.

Perhaps, people start to fall in love with their computers, decrying actual human love. This story covers the love between one extremely advanced persocom, one young girl who might be jealous of the love received by persocom and the completely and totally oblivious country boy Hideki Motosuwa.

Chobits is a Japanese manga created by the Japanese manga collective Clamp. It was published by Kodansha in Young Magazine from the 43rd issue for 2000 to the 48th issue for 2002 and collected in eight bound volumes. Chobits was adapted as a 26-episode-long anime television series broadcast on TBS and Animax from April to September 2002. In addition, it has spawned two video games as well as various merchandise such as figurines, collectables cards, calendars, and art books.

Episode 1: Chi Awakens
Hideki Motosuwa is an 18-year-old student living with the short end of a stick. He’s short on money, has to go to prep school, and is still a virgin. While he’s out one night, he finds a Persocom in the garbage, activates her and names her Chi, after her first word, which appears to be the only thing that she can say.

Episode 2: Chi Goes Out
Hideki wants to find out more about Chi, so he takes her to Shinbo’s friend Minoru Kokubunji, who is a rich but very young expert on Persocoms. There, they find out that she has some sort of learning program, even though she has no OS (Operating System).

Episode 3: Chi Learns
Chi begins learning words from Hideki, who is running very low on money. He decides to get a job to pay for his living expenses. Unfortunately, all the jobs are taken, except for a position he stumbles upon by accident at Japanese pub called Yorokonde (My Pleasure), where he meets a high school girl named Yumi.

Episode 4: Chi Goes on Errands
Hideki comes to realize that Chi doesn’t have “pantsu” (underpants). Since he’s too embarrassed to get them himself, he lets Chi go to a lingerie store to buy them with the help of Sumomo’s navigation system. After several mishaps and mistakes, Hideki finally plucks up the courage to run into the store and buy them himself and run back out.

Episode 5: Chi Finds
Hideki is facing his first practice exam and goes to the bookstore to buy an English dictionary since he forgot his own at his parents’ place. At the store, Chi finds a picture book called “A City with No People,” which sparks Chi’s curiosity.

Episode 6: Chi Weakens
Hideki begins to worry because Chi seems to be tired constantly, He talks to Shinbo about this, and learns that Persocoms need to be charged. Normally, prolonged exposure to sunlight is fine, but in this case, Chi needs to be plugged in.

Episode 7: Chi Works
Chi wants to find a job to so she can help Hideki to pay for their expenses. But Chi, being Chi, manages to get an accidental job in a peep show, and Hideki must look for her.

Episode 8: Chi Bewildered
During the events in the previous episode, Chi’s defense mechanism activates and puts her in a trance-like state that results in her jumping from a building and that seems to disable all of the other Persocoms in the area.

Episode 9: Shinbo and Sumomo Chat
Sumomo is running low on memory space, so she asks her owner, Shinbo, what he wants to erase. He starts at Sumomo’s congratulations on moving in "dance for Hideki and then recalls several main events and funny incidents that have occurred in the series thus far. This episode serves mainly as a recap of the storyline.

Episode 11: Chi Meets
Hideki gets a date with Yumi. While he’s out, Chi reads the sequel to her book, which awakens a part of her memory. As a result, she meets a mysterious girl who looks exactly like her, named Freya, who seems to know everything about Chi’s past that Chi does not.

Episode 12: Chi Confirms
The apartment number in the story is 104, as 4, or Shi. “Shi” is the Japanese word for Four and Death, and because of this, the number four is unlucky in Japan. According to the story, a woman who was hoping to rendezvous with her lover was killed in that room. Hideki and Chi along with Shinbo, Minoru and Yuzuki decide to investigate. At the end, Hideki and Chi discover that it’s all a misunderstanding.

Episode 13: Chi Plays
Hideki gets a DVD player and an online game from Minoru. He, Chi, Sumomo, and Shinbo play the game together. However, Chi is somehow not with them in the game, and Hideki searches around in-game to find her despite the fact that he has no experience in playing online games.

Episode 15: Chi Entertains
Ms. Shimizu suddenly shows up at Hideki’s apartment and spends the night. She doesn’t say why, but she asks him if he prefers Persocoms over people.

Episode 16: Chi Doesn’t Do Anything
Hideki wakes up with Sumomo in his bag. Then he finds out that Shinbo hs run away with Ms. Shimizu and eloped. Bewildered, Hideki goes to Minoru’s house and gets him to contact Shinbo via video call.

Episode 17: Chi Provides
Hideki has lost his wallet and cannot buy anything to eat. Chi wants to give him a meal to make him happy, so she uses her work paycheck to buy the food and make it herself. Her attempt results in the smoke alarm going off, and Ms. Hibiya teaches her to cook a more edible meal.

Episode 18: Minoru and Yuzuki Chat
Minoru and Yuzuki tried to find what Chi really is and search for clues about the creator of the Chobits picture. Yuzuki reviews with Minuro what they know about Chi, and the only thing they can conclude with the information they have is that Chi is not a normal Persocom.

Episode 19: Chi Helps
Ms. Hibiya is cleaning the apartments, and Hideki and Chi offer to help her. When Hideki goes to clean the electronics room, Sumomo accidentally falls onto some wires and gets electrocuted.

Episode 20: Chi Disappears
While Chi is on her way to work, she notices the third part of the book series. “A City With No People” on the shelf of a bookstore. While she flips through the pages, she is grabbed from behind and is kidnapped. Hideki comes from prep school and returns to find Chi missing.

Episode 21: Chi Waits
Chi is still in the hands of her abductor as Hideki searches for her. After he talks to Mr. Ueda about Chi missing work, they decide to search for Chi together, and Mr. Ueda talks about his marriage to his last Persocom.

Episode 22: Chi Wants
Chi is still missing, and Hideki is enlisting s much help as he can to find her. A strange email image gets sent to him and Shinbo from an untraceable email address. It turns out that this is a map for the house of Chi’s abductor, Dragonfly, and he is carrying out research to find out what Chi is.

Episode 23: Chi Answers
Hideki and Chi help Shinbo move out of the apartment to live with MS. Shimizu (who is now married to him). They arrive at Minoru’s house, where he is trying to find information on Chobits.

Episode 24: Chi Wears And TAkes Off
Hideki takes Chi to work. There, Chi changes into the wrong uniform. Ueda tells her it’s the wrong one, but before she goes to change, Yumi sees her wearing it from outside the shop and runs away crying.

Episode 25: Chi Decides
Ms. Hibiya secretly leaves Chi the fourth book in the “A City With No People” series. Ms. Hibiya reveals to Hideki that her husband was the one to create Chi and the other mysterious girl, Freya. She tells Hideki that Chi used to be called Elda and like her sister, was created to be loved and fall in love with others. Chi then tells Hideki that she loves him.

Episode 26: The Person Only For Chi
Hideki responds to chi he also her. At this point, something triggers in Chi, and she files out of the apartment window and onto the roof of the building. Zima and Dita, two advanced persocom who had been observing from a distance, wait nearby intending to stop Chi from launching her supposed hidden program that they fear will destroy all persocoms. Freya accepts that Chi has done the thing Freya couldn’t do while Alice to find her “one and only” Chi finishes running the program. Freya subsides and disappears, living Hideki and chi to live happily ever after.