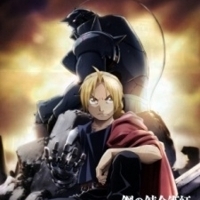 The extra episode is based on a side story of “Fullmetal Alchemist” manga published in “Fullmetal Alchemist Perfect Guidebook” (2003). Edward and Alphonse meet a blind alchemist named Jude who supposedly performed a successful human transmutation, resurrecting a young girl named Rosalie Harbinger. Not everything is how it seems though.