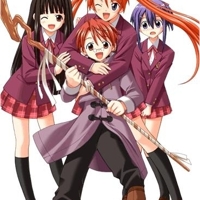 Vampires, Robots, Sorcery… And that’s all before Gym Class! Wizard-in-training Negi Springfield is only 10 years old, but he also happens to be the newest English teacher at the all-girl Mahora Academy. Too bad a bachelor’s degree and an enchanted staff can’t prepare a lad for the chaos of being surrounded by dozens of Junior High girls!

If he can lead the class successfully, Negi will fulfill the final requirement in his quest to become a Magister Magorum… but if he messes it up and the students find out about his special powers, he is doomed to be transformed into a furry ermine!

Negima, also known as Magical Teacher Negima, is an anime adaptation of the comedy-adventure manga series under the same name, written and illustrated by Ken Akamatsu. Produced by studio Xebec, Negima aired a total of 26 episodes (plus 3 OVAs) between August 25, 2004 and June 29, 2005.

Episode 1: The Blockhead in the Professor’s Chair
Class 2-A is introduced to their new homeroom teacher, who apparently is a 10-year-old boy from Wales.

Episode 2: Every Beginning is Difficult
Class 2-A welcomes Negi as their new teacher except Asuna, who discovers that he is a mage in training.

Episode 4: No Place is Like Home
Negi continues his efforts in helping Asuna get better grades.

Episode 5: Rumor Flies
Chamo arrives at the Mahora Academy with the intention to find a Pactio partner for Negi.

Episode 6: Between a Rock and a Hard Place
Negi must protect his class from the rampaging Evangeline.

Episode 7: The Appearances of Things are Deceptive
Negi learns ninja techniques from Kaede. Upon returning to the academy, Negi forms a probationary contract with Asuna. Now they must confront Chachamaru.

Episode 8: One Night Befalls All of Us
Negi engages Evangeline in battle with his new skill. However, Chachamaru won’t let Negi gain the upper hand. Chamo arrives with Asuna to aid Negi in battle. Negi and Asuna kiss to seal a permanent partner contract. Now with Asuna by his side, Negi manages to defeat his adversary.

Episode 9: I’ll Get You, Wascally Wabbit!
Negi is currently on an errand to Tatsumiya Shrine. Together with him are the Narutaki Twins.

Episode 10: Where there is Harmony, there is Victory
Class 2-A is in a dodgeball battle against high school girls who are also attracted to Negi.

Episode 11: When They Are Silent, They Are Shouting
Negi receives a laptop from the academy, but he does not know what to do with it.

Episode 12: Either Learn or Leave
With his reputation as teacher on the line, Negi brings the Baka Rangers (Asuna, Yue, Kaede, Kuu Fei, and Makie) to explore the Library Island’s basement and find a magical book that will help them pass the upcoming exam.

Episode 13: We Live and Learn
After being trapped in one of the Library Island’s basement, Negi starts to lose hope and prepares to leave the academy. Later, he discovers that his class managed to take the top 2nd spot on the exam’s leaderboards.

Episode 14: I Hope the Memory of Our Friendship Will Be Eternal
Negi and Konoka go to Harajuku to buy an alarm clock, after breaking Asuna’s. Little to their knowledge, the Cheerleaders (Misa, Sakurako, and Madoka, are secretly following them during their venture.

Episode 15: A Reliable Friend Is Perceived in an Uncertain Situation
Ayaka is visited by Negi and class 2-A during the summer break. During their time together, Ayaka reminiscences her early years with Asuna.

Episode 16: Love and a Cough, Are Not Kept Secret
Class 2-A decides have a pillow fight to celebrate the end of summer break.

Episode 17: Nothing is Difficult for a Lover
Yue gives amusement park tickets to Nodoka to help her confess her feelings for Negi. While Negi and Nodoka are out on their date, Yue and Asuna stalk them.

Episode 18: Love Does Not Recognize Rank
Negi is surprised with Nodoka’s confession, and is unsure with how to respond. Meanwhile, Asuna bakes a cake for Takamichi’s birthday.

Episode 19: Words Fly Away, Those Written Remain
Kazumi starts notices something bizarre and decides to investigate. Apparently, they have a classmate named Sayo Aisaka, but it is only her who noticed Sayo’s presence in their class. Later, she discovers that Sayo is a ghost from the 1940s.

Episode 20: Unless You Have Believed, You Will Not Understand
Class 2-A sets out on a field trip to Kyoto. Meanwhile, a sinister group of mages takes interest on Konoka.

Episode 21: It Must Not at All be Despaired!
Konoka is in danger after evil mages target her. Negi, Asuna, Setsuna, and several other students attempt to save her.

Episode 22: It is Difficult to Make a Joke with a Sad Mind
Negi asks his former enemy Evangeline to teach him magic. Meanwhile, Asuna sees Takahata together with Mahora’s counselor, which saddens her.

Episode 23: Remember to Die
Asuna remembers a dark past, and her 10-year contract with the devil.

Episode 24: Both Weapons and Words Wound
Negi and Class 2-A is devastated after Asuna’s unexpected death. Setsuna leaves after failing to protect Asuna from her fate. Meanwhile, Negi is desperate to bring back Asuna and asks Evangeline for help. However, she reveals that there is no such magic that can reverse what had already happened. Later, Yue confesses her feelings for Negi, and kisses him in front of Nodoka.

Episode 25: Death is Certain, the Time is Uncertain
Negi, Chamo, and the rest of Class 2-A travels back in time to 1993 Germany to learn more about what happened to Asuna.

Episode 26: Not for Me, Not for You, But for Us
Negi forms a probationary contract with Class 2-A, with the intention of defeating the demons and save Asuna from her contract with the Demon King.