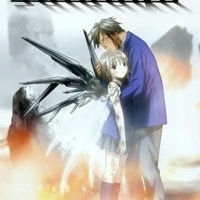 Chesi and Shuuji is an awkward high school couple trying to make their relationship work.

One day, while Shuuji was out with his friends shopping at Sapporo, unknown air bombers suddenly attack their city, followed by mass confusion and chaos. Surviving the initial attack, Shuuji wanders through the wreckage. Much to his surprise, he stumbles upon Chise, who appears to have metal wings and weapons that are shooting down enemy fighters from the sky one by one.

The story follows Chise’s struggle to find her humanity whilst fighting a war as the ultimate weapon against an unknown enemy, and how Shuuji slowly realizes his love for Chise.

Saishuu Heiki Kanojo (She, The Ultimate Weapon), also known as Saikano: The Last Love Song on this Little Planet, is an anime adaptation of the sci-fi drama manga series under the same name, created by Shin Takahashi. Produced by studio Gonzo, the anime series aired a total of 13 episodes (plus an OVA) between July 2, 2002 and September 24, 2002.

Chesi
Chesi is the main female protagonist of the show. Shy and clumsy in nature, Chesi is a high school student who has failing grades in all her subjects except World History. She spent most of her elementary years hospitalized in Tokyo, which explains her social awkwardness. With the help from Akemi, who is one of her few friends, Chesi starts to date her schoolmate Shuuji. Despite her inexperience and Shuuji’s usual apathetic demeanor, Chesi still tries to make their relationship work.
Without her knowledge or consent, Chesi has been made into the ultimate weapon, a cyborg super soldier meant to protect Japan. As time progresses, Chesi slowly loses her humanity to her mechanical self.

Shuuji
Shuuji is the main male protagonist of the show. The story is narrated by Shuuji as he reads Chesi’s diary. He is Chise’s classmate, and she had confessed her feelings for him at the start of the series. Although he also harbors feelings for Chesi, Shuuji initially finds it difficult to express his feelings, resulting to a strain in their relationship. Things got more complicated when Shuuji’s first love Fuyumi, decide to return to their city.

Akemi
Childhood friend and classmate to both Chise and Shuuji, Akemi is a typical tomboy who often advises Chise when it comes to dating. She comes to Chise’s defense whenever Shuuji accidentally hurts her verbally.

Atsushi
Atsushi is Shuuji’s best friend. With his fascination of the military and desire to the girl he loves, Atsushi decides to join the JSDF.

Tetsu
Tetsu is Fuyumi’s husband who strongly resembles Shuuji. For this reason, Chise is attracted to him. He is also a regiment leader, and sole survivor of Chise’s first platoon.

Fuyumi
During her younger years, Fuyumi used to train Shuuji’s track team. It is revealed that she and Shuuji had once had a relationship, but later Shuuji tells her that his love was not real. She often feels lonely as Tetsu is always away for army duty.

Episode 1: We’re Going to Fall in Love
Chise had finally mustered up the courage to confess her love for Shuuji, and soon enough they start dating. However, Shuuji is still unsure of his feelings for Chise, and starts to doubt the strength of their relationship. Still, the awkward couple finds a way to keep their relationship working. One day while shopping with his friends at the Sapporo mall, unknown bombers had suddenly attack their city. In the midst of confusion and chaos, Shuuji discovers that Chise is more than meets the eye…

Episode 2: I’m Growing…
Shuuji tries to act normally even after discovering that Chise is some kind of cyborg weapon. However, Chise breaks down in tears as she confesses that she is only getting stronger. They then try to escape together using Shuuji bike.

Episode 3: Together, Alone
The couple decide to escape town together. Shuuji promises to Chise that he will be waiting for her at the train platform. However, Chise is confronted by a military entourage. Meanwhile, Shuuji sees a woman strongly resembling her former teacher and first love, Fuyumi.

Episode 4: Fuyumi
For the very first time, Shuuji and Chise go out on a date at an aquarium. Afterwards, Shuuji goes to Fuyumi’s house to retrieve his lost wallet, but has to face her seductive advances. Meanwhile, Chise meets Tetsu for the first time, who instantly catches her interest as Tetsu greatly resembles Shuuji.

Episode 5: Liar
While in school, Chise senses an earthquake. Shuuji then takes her outside the classroom, so that she can transform without anybody else seeing. A military helicopter arrives to get Chise, and Shuuji tells her to meet him at the observatory later that night.

Episode 6: Classmates
After learning that Shuuji went to visit Fuyumi’s house, Chise decides to break up with him, and become regular classmates instead. Atsushi then announces his desire to join the military, in order to protect Akemi.

Episode 7: What I Want to Protect
The war had finally reached Shuuji’s town. Following their breakup, Chise leaves a note on Shuuji’s locker, and stopped going to school. Meanwhile, Atsushi is intrigued by the “Chise” weapon, but no one wants to give him a clear answer.

Episode 8: Everyone Changes
Chise appreciates how Tetsu treats her like a regular human girl, and they both end up cuddling and kissing each other. Later, an earthquake hits their town.

Episode 9: Akemi
After receiving no maintenance for over 2 days, Chise’s condition had become worse.

Episode 10: And Then…
Tetsu dies while Chise holds her in her arms. Later, Chise and Shuuji reconcile.

Episode 11: Our Time Together
Shuuji and Chise manages to escape their town, and together they start a new life. At first everything seemed to be returning to normal, after they have found jobs and a place to live. However, their brief moment of peace is shattered when Kawahara finds them and requests Chise’s return to the base.

Episode 12: Love Song
Chise loses her ability to speak, and both her mental and physical condition is gravely damaged.

Episode 13: And So, the Two of Us Fell in Love
Chise reveals to Shuuji that the world may be completely destroyed. Despite this, she will try her best to protect everyone, even though she knows her powers will not be enough. She then requests Shuuji to stay by her side until the end.

Anime Rating
7.8/10
493 users rated this.
Similar in these categories.