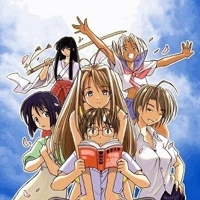 Love Hina follows the story of Keitaro Urashima, a young boy determined to study at Tokyo University and fulfill the promise he made to a childhood friend he barely remembers. Unfortunately, his parents can no longer support him, and now he has to manage his grandmother’s all-girls dormitory while cramming for his college exams.

How is he supposed to keep his nose on the books with so many attractive women surrounding him? Follow Keitaro’s daily life with the girls, and the day to day mischief he has to deal with.

Love Hina is an anime adaptation of the comedy-harem manga series under the same name, written and illustrated by Ken Akamatsu. Produced by studio Xebec, Love Hina aired a total of 25 episodes between April 19, 2000 and September 27, 2000.

Episode 1: All-girls Dorm with Outdoor Bath: Hot Springs
15 years ago, Keitaro Urashima made a promise to his childhood friend that they would go to Tokyo University together. Despite barely remembering her name or face, Keitaro is determined to fulfill his promise. After visiting her Grandma at the apartment building she owns, he ends up being its manager.

Episode 2: The Hinata’s New Resident, Shinobu: Arrow Signs
Shinobu Maehara, one of the apartment’s tenants, is going through hard times due to her parents getting a divorce. Since she is about to leave the apartments, Keitaro and the other tenants decide to make her a farewell party. Later, Shinobu decides to stay after realizing she is happy to live there with Keitaro and the others.

Episode 3: Kendo Girl in Love!? Swordplay
Keitaro meets Motoko Aoyama for the first time. Motoko refuses to believe that a man is now in charge of their apartments, and tries to attack him with her wooden sword. Later, the other residents try to convince her, and Motoko finally but vaguely accepts Keitaro as the new manager.

Episode 4: The Tokyo U Promise from 15 Years Ago: Diary
The residents become disappointed with Keitaro, after learning that he lied to them about being a Tokyo U student. Nevertheless, they let him stay as manager, as long as he works around the apartment. Later, a misunderstanding between Naru and Keitaro arises.

Episode 5: Wow. A Trip to Kyoto! Exciting
Keitaro and Naru fails at their entrance exams. They then decided to part ways, and spend the rest of the day roaming around Kyoto. They meet again but fail to recognize each other as both of their eyeglasses are broken. At the end of the day, Keitaro and Naru decide to become friends again.

Episode 6: Keitaro’s First Kiss is with…? Journey
After seeing Keitaro on TV, the girls decide to find and rescue him. Meanwhile, Keitaro and Naru help Mutsumi get home. However, both parties get lost due to their bad sense of direction.

Episode 9: The Case of the Missing Hinata Apartment Money: A Mystery
The monthly payment for the apartments is stolen by an unknown thief from Keitaro. As the only girls with a solid alibi, it is now up to Kitsune and Su to find the culprit.

Episode 10: Who is the Beautiful Women Wandering in the Moonlight? Transformation
A girl who closely resembles Su causes mischief.

Episode 11: The Idol Shooting for Tokyo U is a Prep School Student: Sing
Naru wins a singing contest, which gives her an opportunity to become a singing idol.

Episode 12: Changing After the Wedding? Swordmaster Motoko’s Sunday Best: Feminine
Motoko temporarily loses her skills with the sword due to her fear of turtles.

Episode 13: The First Kiss Tastes Like Lemon? Marshmallow? Grown-up
Shinobu wonders about who she will share her first kiss with, after witnessing Keitaro’s several failed attempts at kissing Naru.

Episode 14: Naru’s Crush Is Now a Tokyo U Professor: Turning into Love?
Keitaro ends up working for a scientist at Tokyo U, in order to come up with 67,000 yen and pay their utility bills.

Episode 15: I Love You!? Romantic Confession Inside a Cave: Tall Tale
Keitaro must now look after Sarah, as his father is out for work. Later, they make a startling discovery.

Episode 16: Monkey Performance at the Seaside Teahouse Hinata: A Kiss?
The residents are tasked to conduct a play, in order to attract customers for Haruka’s beach tea house.

Episode 17: Mesmerized by Naru on the Haunted Island! Something’s Fishy!
Shirai and Haitani concoct a plan to help Keitaro win Naru’s heart. Later, Naru is attacked by a real ghost, and Motoko has to save her.

Episode 18: Girls Dressed in Yukata for the Summer Festival: Let’s!
Before returning to the apartments from their summer break, the girls attend a festival at a local town dressed in traditional clothing. Meanwhile, Kitsune wants to stand between Naru and Seta’s relationship.

Episode 19: Marry into Money? A Prince from Across the Sea: Warm
A man closely resembling Keitaro appears.

Episode 20: A Sepia-colored Promise with a Sleeping Girl: A Trick?
Keitaro discovers a doll that can move and talk on its own. He learns from the doll that someone has failed to fulfill a promise for him. Keitaro then decides to fulfill this promise, together with the other residents.

Episode 21: Jealous Outburst? Two Lovebirds on a Boat: Tremble
Keitaro and Naru celebrate together after finally obtaining better grades. Later, Mutsumi declares that she will be trying for Tokyo U as well.

Episode 22: Little Sister Mei’s Devious Plan: It Can’t Be!
Naru’s step sister, Mei, wishes to take her back home. In order to achieve this, Mei sets up a plan to pair Keitaro and Mutsumi.

Episode 23: Naru Narusegawa – Her Wavering Heart and Keitaro: Crushed
Keitaro’s grandmother has returned to claim the apartments. Meanwhile, Naru is troubled about her recent discovery.

Episode 24: Celebrate! Are the Blooming Flowers Tokyo U? Love? Everybody
Keitaro has now to decide who his soulmate will be.

Episode 25: Motoko’s Choice, Love or the Sword: Don’t Cry
Motoko must beat her sister in a fight, or she will have to marry Keitaro.